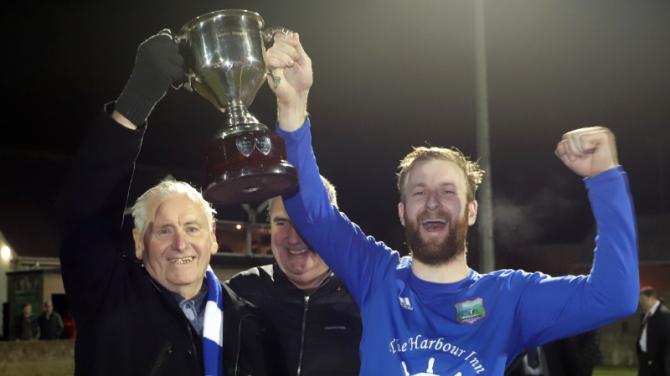 ANNALONG won their first piece of Mid Ulster Football silverware on Friday night as two pieces of Lee Feeney brilliance led to two magnificent finishes by Stephen Burden and Ricky Graham, as the Mourne men got off to a whirlwind start in this Beckett Cup final.

In all honesty it was a game that could have gone either way after Gilford captain, Mark Feeney scored with what seemed to be a very soft penalty award.

Annalong got off to a dream start after five minutes when Lee Feeney picked out Stephen Burden who crashed home an unstoppable shot from an acute angle in what must be a contender for goal of the season.

Lee Feeney controls the ball as Jordan McKinstry moves in.

This clearly unsettled the Crues and it soon became two five minutes later with that man Lee Feeney involved again.

Feeney picked the ball up in midfield and his slide rule pass sent Ricky Graham through and the big striker still had plenty to do but after running on to the through ball he coolly planted the ball past Keelan McKinstry in the Crues goal.

The Crues had early chances themselves with Jordan McKinstry firing a shot across goal with Tyler Burns just failing to turn it home. Ruairi Feeney also fired a shot from distance just over the bar.

Jonny McCulla’s 30-yard drive had the Annalong supporters on their feet but his shot went the wrong side of the upright with the ‘keeper beaten.

On 20 minutes Gilford were awarded a penalty when the referee adjudged there to be pushing following a corner. Annalong ‘keeper John Sloan made a gallant attempt to save Mark Feeney’s penalty but the ball crept over the line to bring the Crues back into the game.

Gilford’s rearguard was coming under pressure as Annalong adopted a more direct approach in an attempt to put daylight between the sides and with a minute of the half remaining Mark Newell fired narrowly over and the scoreline remained 2-1 at the interval.

The Crues attacked more in the second half with Tiaga Ferreira threatening and he almost turned home a loose clearance.

Ruairi Feeney had a shot saved but the Annalong defence of Gareth Graham, Peter Heelham and Richard Gordon were in top form and held firm, while at the other end Jonny McCulla shot over and then a great three-man move ended when Darren Hyland fired narrowly wide.

As the game progressed the Crues threw everything at the Annalong defence in an effort to force extra time and John Sloan in the Annalong goal made a fine save to push the ball away for a corner.

Then in the third minute of added time Eoin Bates and the rest of the Gilford faithful watched in horror as his crisp shot crashed off a post and away to safety.

Then after seven minutes of extra time the referee blew the final whistle to signal the start of celebrations among the Annalong supporters in the large crowd.