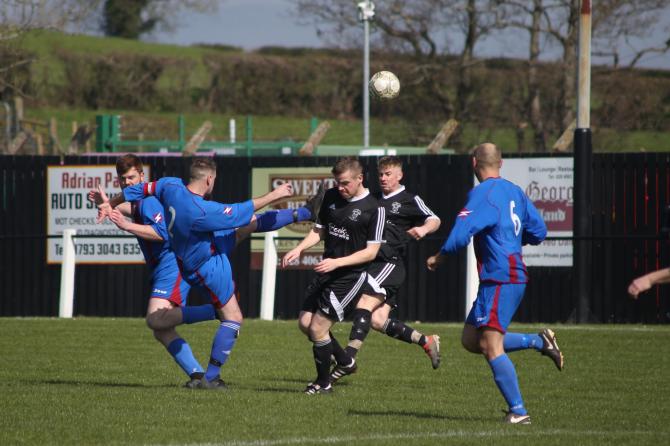 David Gilmore narrowly misses a boot to the face!

RATHFRILAND Swifts have progressed to the final of the Mid Ulster League Cup following a hard-fought 1-0 win over Scarva Rangers Reserves at Iveagh Park.

A typically tense semi-final, the Swifts’ first half opener was enough to see them through.

A late barrage from the visitors kept things tight but an organised defensive display means a cup final date for the Swifts.

Rathfriland Football Club would like to congratulate Alex Scott and assistant Allen Ervine, as well as the Swifts players, on reaching the Mid Ulster League Cup final. This is no doubt a big day out for the club and hopefully some silverware will return to Rathfriland to represent a fantastic season for the Swifts.

The Swifts head for their second semi-final in the space of seven days, when they lock horns with Caledon Rovers this Saturday in the semi-final of the O’Hara Cup.

Action from the Colts game against Scarva on Saturday.

Caldeon sit second in the league with Alex Scott’s boys tucked in close behind in third place, so this has all the hallmarks of a great cup game.

All those wishing to head for the semi-final to support the boys this Saturday (13 April), the match kicks off at 2.15pm.