Double delight for Down 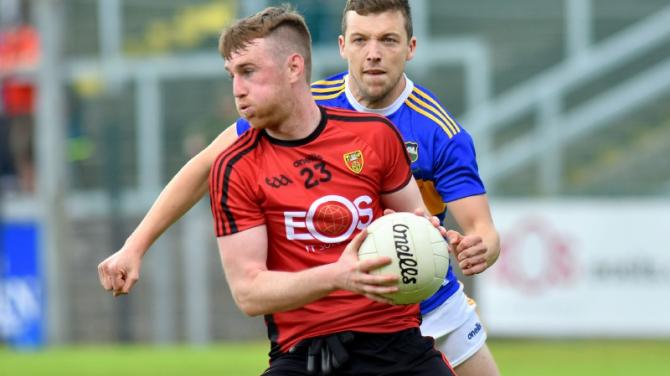 DOWN manager Paddy Tally accepts that Mayo will be the toughest test his side will face this year but is confident his Mourne men will rise to the challenge following Sunday’s late win against Tipperary.

Down will face Mayo back in Newry’s Pairc Esler on Saturday, 22 June with a late throw-in (7pm) expected to avoid a clash with Christy Ring Cup final, which Down play in earlier that day.

Speaking after the match the amicable Down manger said that he knew the All Ireland qualifier was going to be “a tough match”.

“I knew it was going to be very hard; these qualifying games are like that. They are cagey affairs because this is the last chance saloon.

“With the Tipperary game I was a wee bit concerned as to what way they might set up with the form they were in,” said Tally.

“Mayo are different, they are National League champions and they have been knocking at the door and probably should have won an All Ireland over the past few years. So they are one of the top four teams in Ireland and it is going to be very tough.

“Having the game in Newry is great and the support against Tipperary was fantastic in the last 10 or 15 minutes and they really got behind the team.

“Mayo had a lot of travelling support and I would like to think that Pairc Esler will be full and it will be a real battle.”

When he was asked why Down didn’t do so well in the first half, he said: “It’s nerves, maybe taking the wrong options at times, and forcing things that weren’t on. But I think in the second half we were a bit more composed. And I thought there was a bit more hunger in the Down team in the second half, especially when it came to turning the ball over and we showed a great desire to win the game.”

He praised the hunger his side showed in the latter stages against Tipperary and feels that Down will need that fighting quality in spades if they are to get any joy against Mayo.

“Our lads should take a lot of confidence from Sunday’s win and to do it without Caolan Mooney was significant and to have Benny McArdle back was brilliant. All being well we should be as strong as we have been all season for Mayo.

“There is a desire in this team that they don’t want to lose and it will take it all against Mayo.

“It’s because we don’t quit. We don’t accept boys that lie down and give it up. We always believe there is a chance - there’s a chance right to the last minute. And we’re hoping it’s going to continue. It’s a great trait in a team that they refuse to get beaten.

“When we got our noses in front Tipperary had to come out and play a bit. They left spaces at the back and we were able to exploit those spaces.

“The goal was a big factor in the game. Once the goal went in Tipperary had to come out and chase the game and that allowed us to get in behind them.”

The Down boss admits that his team needs to find another level if they are to remain in the Championship and feels it will be a great learning curve for his side.

“Our next match is going to be a big jump, we are playing a really top-quality team and we will learn probably more from this game than we have done all season, because this is the first time we have played a top team in the Championship,” Tally said.

“It will be a real experience for the players and one we are looking forward to.

“Mayo, Tyrone and I suppose Monaghan were the tough teams to get in the draw and Mayo the toughest so it is without doubt, the hardest test we will face and we just have to make sure that we are best prepared as we can be.”

And the Tyrone native is enjoying his first season as boss.

“It’s exciting. We don’t do things easy here. It’s a learning process. We’re learning about our players and how we do things.

“The Ulster Championship is a great competition. Now we’re into the qualifiers.

“I was very relieved because everybody knew that if we didn’t win today, the next time we would be getting together would be November for pre-season training. It’s unbearable to think that we wouldn’t see each other for that length of time, especially seeing the potential Down have.

“I firmly believe these lads can go somewhere in this competition. And it would have been an awful shame to leave it here today. We knew that at half time and that we had no option but to up our game.”