NIFL Premiership: Implications at both ends of table as leaders Linfield take on Swifts 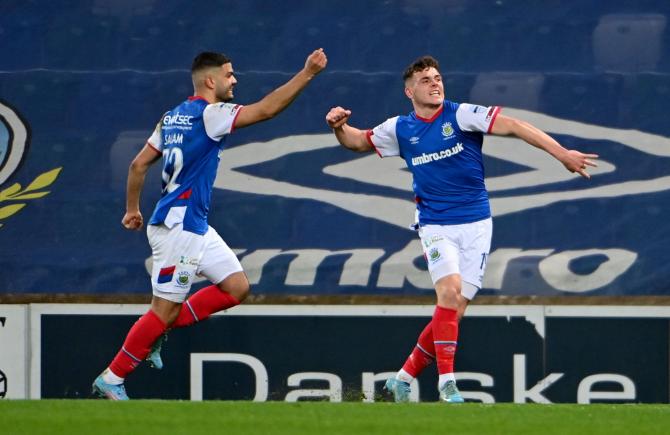 Dungannon Swifts take on league toppers Linfield this Saturday at Windsor Park in a clash that is sure to have implications at both ends of the table.

The Swifts fell to a 1-0 defeat to title hopefuls Glentoran on Saturday. A defeat, though a narrow one, that will surely give them confidence against league powerhouses Linfield.

The Swifts will no doubt be hoping to turn that confidence into some kind of result against Linfield to bolster their survival hopes. As things stands, with 30 games played the Swifts sit on 28 points, seven points clear of relegation playoff placed Portadown, who have played an extra game, and 16 points ahead of bottom placed Warrenpoint, who the Swifts defeated last Wednesday.

Although there is some breathing room between the Swifts and the drop, with a tough run of games to play before the split, it is very much all still to play for.

Linfield will be hoping for a win over the Swifts to help boost their championship credentials. The Blues currently sit atop the league with 68 points, three points clear of Glentoran and four points clear of Cliftonville, who hold a game in hand over the leaders.

After their clash with Linfield, that’s followed by third placed Cliftonville next Tuesday then fifth (level on points with fourth) placed Crusaders next Saturday.

New signing Bilel Mohsni made his second competitive start for the Swifts against Glentoran and, although new to the league, having the veteran ex-Rangers and Tunisian international defender is sure to be useful as the Swifts attempt to navigate their way through a difficult run of games.

Another of the title challengers, Glentoran, take on Ballymena United at the Showgrounds.

United were to have met the Glens in the Irish Cup semi - but the East Belfast side have been axed from the competition. Glentoran intend appealing the decision.

Third placed Cliftonville travel to Mourneview Park to take on a Glenavon team with both teams enjoying good form at the moment. The Lurgan Blues have lost just one of their last nine games, a 4-2 defeat to Glentoran, while the Reds haven’t lost since January 17, also to the Glens. They’ve also won their last eight in a row including Sunday’s BetMcLean League Cup final against Coleraine.

Crusaders travel to bottom club Warrenpoint Town, who have lost their last four games in a row and are nine points adrift at the foot of the table.

Fellow strugglers Portadown host Coleraine, who have their own targets after Sunday’s League Cup loss to Cliftonville.

"It is important to bounce back from Sunday and nail our top six place," Bannsiders boss Oran Kearney said.

"We want to finish as high in the table as possible and that starts tomorrow afternoon.

"The Euro play-off is a big incentive for us and that's our next objective."