Dibusz denies NI but positives for Baraclough to take from defeat 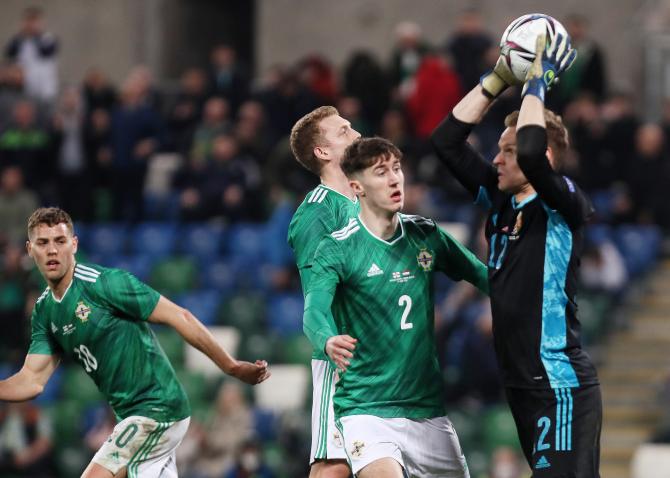 Northern Ireland will be wondering how they didn't get anything from this international friendly against Hungary.

The visitors have a mistake from Niall McGinn and heroics from their goalkeeper Denes Dibusz to thank for ensuring they got the victory.

While the result may not have gone their way, there were positives for Ian Baraclough's side to take. In particular their strong finish to the game - it could be argued they played better here than in their win over Luxembourg on Friday - and the performance of debutant Paddy Lane will give the Green and White Army some reasons to be cheerful.

Captain Steven Davis was unlucky not to open the scoring early on when he capitalised on an error by Zsolt Naby. He curled the ball towards goal with the outside of his right boot, however his effort went out for a goal kick off the far post.

Roland Sallai had a crack at goal from just outside the box but Bailey Peacock-Farrell was equal to it.

Northern Ireland had another great chance when Josh Maginnis flicked the ball into the path of Gavin Whyte. He found Niall McGinn on the edge of the box and it took a really good right handed save from Dibusz to deny the veteran winger.

They were denied a penalty in the opening seconds of the second half when substitute Dion Charles was nudged and knocked off balance as he burst through on goal. It looked a certain spot kick but the referee waved play on.

McGinn's attempt at a back pass on 56 minutes led to Hungary scoring the first goal at Windsor Park in five games. It was a weak effort that was short and with Bailey Peacock-Farrell committed, Adam Szalai slotted home to break the deadlock in what had become something of a war of attrition.

Headers from George Saville and former Linfield and Ballymena United defender Trai Hume almost levelled the scores late on but once again the Hungarians had their goalkeeper to thank for coming to the rescue.

Charles too was to be denied by Dibusz when a free kick fell for him in the box, with the striker firing straight at the goalkeeper in stoppage time.