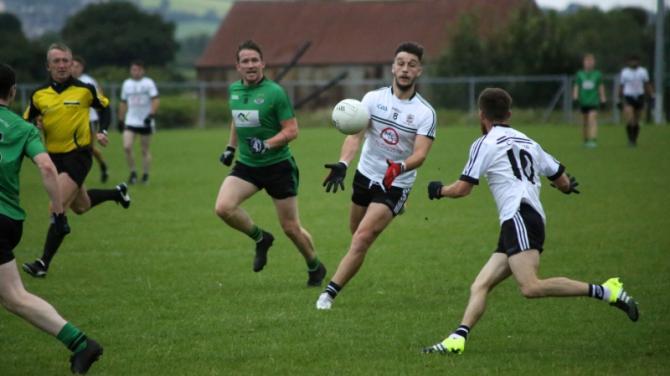 KILCOO overcame a sluggish start and Conor Laverty’s first-half dismissal to run out winners after extra-time against Castlewellan in an absorbing tie on Friday night in Clonduff.

Castlewellan raced into a three point lead early on courtesy of free-kicks from Daniel Morgan (2) and Donal McKibben as they demonstrated that they weren’t going to be overawed by the six-time county champions.

Kilcoo’s early frustrations came to the boil as Laverty was booked by referee Brendan Rice for dissent, and it wasn’t until 11 minutes that the Magpies recorded their first score with a well taken Eugene Brannigan point.

Morgan restored Castlewellan’s three-point advantage through another free that was emblematic of the underdogs willingness to take the game to Kilcoo and seemed to typify an uncharacteristically edgy opening quarter of an hour for the Down champions. Ruari McArdle hacked down Ceilum Doherty to the fury of the Killcoo fans and earned himself a booking in the process, with Paul Devlin snapping up the opportunity to reduce the deficit to two points with the resulting free-kick, to make it 0-2 to 0-4.

The Magpies were starting to express themselves with a little more freedom with Niall Brannigan and Jerome Johnson linking up particularly well down he flanks to set-up Conor Laverty, only for the county forward to send his shot wide. Jerome Johnson put Kilcoo’s noses in front with a superb strike into the bottom corner of Castlewellan keeper Michael Watson’s net after a clever assist from midfield powerhouse James McClean.

Kilcoo keeper Niall Kane came from his goal to double his side’s lead with a pointed 45 as Kilcoo started to turn the screw on their South Down neighbours. Tit-for-tat points were exchanged by the sides through Aaron Brannigan and Rory Burns to leave Kilcoo leading by 1-4 to 0-5.

The red mist then descended upon the game, albeit temporarily, as Castlewellan’s Rory Burns received a black card for a reckless challenge, whilst Kilcoo went down to 14-men as Conor Laverty received his second yellow of the game for his clash with Ruairi McArdle.

Daniel Morgan made it a one-point game with his free-kick before Darryl Brannigan provided the perfect riposte on the stroke of half-time with a mesmeric point to leave The Magpies going in at the break leading 1-5 to 0-6, which would have had them rubbing their hands, considering their sub-par performance for much of the half.

Castlewellan quickly seized the initiative in the opening stages of the second-half and press with much more vigour, utilising their numerical advantage to try and stretch Kilcoo to good effect.

Their efforts were rewarded with points in quick succession from Daniel Morgan and Donal McKibben to draw the sides level. Kilcoo hit back through a long-range Martin Devlin point which regained the lead for the county champions, though this was quickly cancelled out by a fine score from Castlewellan’s Sean Dornan.

This was truly a tilting, see-saw of a match which was poised to go down to the wire, as the two sides traded blows like weary prize-fighters hoping to do enough to convince the judges at ringside.

The blustery conditions were a factor that both sets of players had difficulty mitigating against, with passes going astray and interchanges breaking down as a consequence.

The pendulum seemed to decisively swing in Castlewellan’s favour as two Sean Dornan frees put them into 0-12 to 1-7 lead going into the final stretch.

However, you don’t win six county titles on the spin by being wallflowers, and Kilcoo’s indomitable, never-say-die spirit ultimately got them out of jail through a well-taken Paul Devlin free and his brother Marty’s equaliser with a minute to spare to force this one into extra-time.

Paul Devlin opened the scoring in extra-time and took the lead for Kilcoo, a lead they never relinquished for the rest of this bruising affair, as leaden Castlewellan legs faded. Gerard McEvoy’s goal early into the second period of extra time killed the contest, with two further points from Paul Devlin and a Eugene Brannigan score casting them further adrift. Aidan Brogan’s late red-card compounded Castlewellan’s misery and sent the reigning champions  marching into the next round.