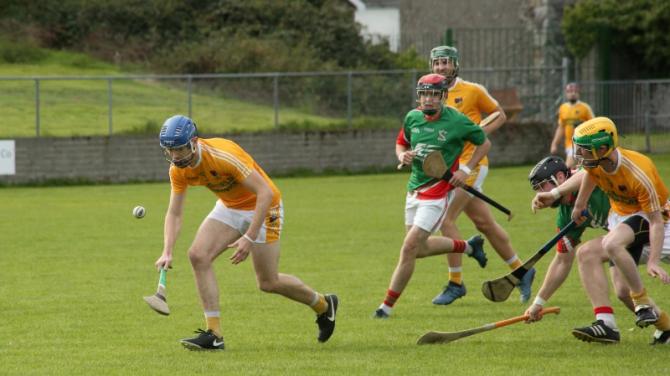 Clonduff scoop up an opportunity.

The hurlers came through a bruising and highly entertaining encounter after extra time in Castlewellan to book a hard-earned place in the county final.

Kilclief got the first point on the board but Clonduff took over the next 10 minutes and pushed into an early lead at the end the first quarter by 0-6 to 0-2.

A change of tactics by Kilclief saw them revert to a sweeper at centre half back. This stemmed the Clonduff attacks and allowed Kilclief to set up attacks which saw them close the gap at half time 0-10 to 0-7 in favour of Clonduff.

Clonduff were reduced to 14 men five minutes into the second half but things were about to get much worse for Clonduff with the concession of two quick goals, which saw Kilclief bounce into the lead 2-8 to 0-12.

However showing great character, Clonduff started to dominate both their own and Kilclief poc outs and going into injury time they had crawled into the lead by three points.

Clonduff had two more straight forward chances to leave a probable unassailable gap but they failed to convert both.

A never-say-die last few minutes from Kilclief saw them hit the Clonduff net once again from a 21-yard free and so the game headed to extra time with the scores at Clonduff 0-20 Kilclief 3-11.

Despite the tough 60 minutes just played, both teams continued at a frantic pace in extra time to keep the entertainment levels high.

Clonduff continued to provide more of the flowing scores from play while Kilclief were having no luck with their long-range free taking.

Thankfully following some resolute defending and a last minute diving block there was to be no way back for the Strangford men and Clonduff supporters heaved a huge sigh of relief at the final whistle on a final scoreline of Clonduff 0-26 Kilclief 3-13.

Clonduff now face Newry Shamrocks next Sunday in Newcastle where they will hope to go one step further than last year.