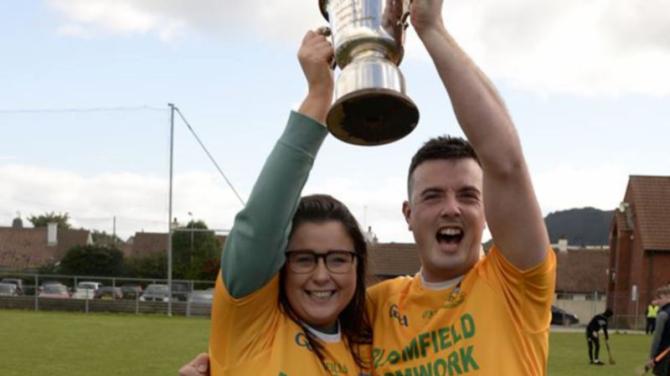 Sean Downey, Clonduff captain is accompanied by Ellen McCrilly (girlfriend of the late Peárce Branagan) in lifting the Junior Hurling Cup as they celebrate Clonduff’s one point victory over Newry Shamrocks.

Playing with the wind, Newry Shamrocks were first to settle any championship nerves finding themselves first on the scoreboard and into an early lead.

Clonduff were soon to follow, however and right from the off this looked to be set for an enthralling encounter between the two sides.

Despite some great defence work from the yellas, Shamrocks chipped away at their points and quickly went two points ahead, domineering the field of play.

Shamrocks had now found great momentum and seized the opportunity of a free, rattling the back of the net to put four points between the teams on a scoreline of 1-03 to two points.

Clonduff however, benefited from the previous experience of a championship final and with a score from Rían Branagan, began to build momentum of their own.

The Clonduff defence picked up pace and Shamrocks began to struggle on the attack while at the other end of the field, Clonduff took every scoring opportunity that came their way, with some fantastic frees taken by Christopher Young.

Shamrocks once again came at the Clonduff defence but a phenomenal catch from Patrick Branagan prevented any score and the line was cleared by Shea Murnin who then earned a free for Clonduff, which, with great team work, resulted in a Clonduff score bringing the sides level in the 33rd minute.

In a quick and fiery attempt to grab the lead back, Shamrocks raced up the pitch with their aim on goal, however Niall Quinn did well to clear the line as the half-time whistle blew, leaving the sides all square 1-3 to six points going into the dressing room.

The Clonduff side received a mighty welcome back on to the pitch from their supporters which seemed to spur them on, as they got off to a fast-paced start to the second half with Christopher Young sticking the ball over the bar.

This was certainly a game that was not going to be easily won and despite edging a two-point lead early in the second half, Clonduff conceded a second goal which gave Shamrocks the advantage, the scoreboard reading 2-9 to 10 points.

But this was to be Clonduff’s day and they soon saw the net themselves as Shane Murray scored a goal to regain their two-point lead.

Clonduff never looked back and despite Shamrocks levelling the scores again, the yellas looked in control of the game. A long-range free taken by Shamrocks left the Clonduff support on the edge of their seats, as it looked to have gone over the head of goalkeeper Niall Quinn.

However, this was simply an illusion and as the ball made its way back up the field, the cheers echoed the stand in St Patrick’s Park - an exciting, closing 10 minutes were guaranteed!

Both teams made the most of scoring opportunities as well as frees awarded and as the scores stood at 1-13 to 2-9, Clonduff were awarded a sideline ball.

John Murphy stood up to the line giving the ball a mighty hit as it travelled up the pitch going wide, however it did not matter as the Shamrocks goalkeeper hit the ball, the final whistle blew.

The Clonduff supporters were elated as they made their way onto the pitch to congratulate their players. In a cracking game for any neutral, Clonduff ran out victors by a single point.

Sean Downey the Clonduff captain stepped up to receive the Junior Hurling Cup from the county chairman, Sean Rooney.

But before any celebrations, Sean gave an emotional but very fitting tribute, not only speaking highly of his team mates and management, but remembering their brother Peárce Branagan who tragically passed away in June this year.

Sean believes that Peárce played an integral role in their championship victory and with this in mind, invited Peárce’s girlfriend Ellen McCrilly to help him lift the cup in Peárce’s honour.