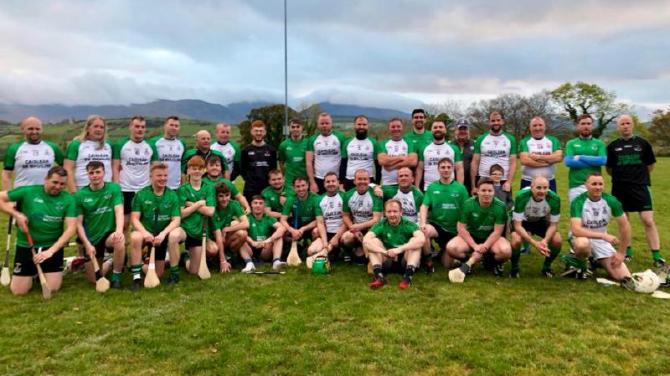 The Under 25 and Over 25 Hurlers who recently played against each other in an internal club game.

The aged verses the youngsters hurling match at Castlewellan GAC took place when the Under 25 hurlers faced the Over 25 hurlers.

It could not be reported on it until now as there was an appeal on the result of the game. The judge and the jury being in the aged bracket, saw nothing wrong with the underhand tactics of the elder guys!

It was a hotly-contested match which ended with the aged aided by some dubious but brave refereeing decisions, prevailing by two points on a scoreline of 8-9 to 6-13.

Afterwards aching bones and bruised egos were treated with refreshments in the club. There was a fantastic turnout of Townies and maybe, just maybe, the tide is turning as the aged are getting older!

The judge has decided that the age limit for the elders will be lowered so as they can continue to win every year.