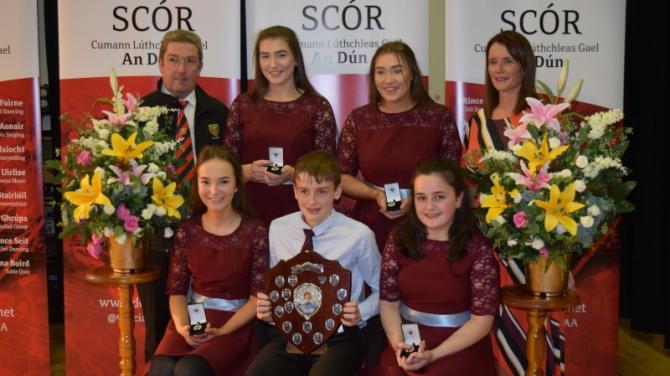 THE 50th anniversary of Scór always had the potential to be a special year of celebrations, and on Sunday night (25 November) in St Malachy’s High School, Castlewellan we witnessed one of the best we have ever had.

Standing room only in the packed hall when Bean a Tí, Ciara Pickering got proceedings underway with Eimear Magee, Mayobridge singing our national anthem.

Ceili dancers from Ballycran, Mayobridge, Dromara and Saval danced it out for the County title with Mayobridge emerging as County Champions for the first time in their club’s history.

Solo Singing was next on stage with Niamh McDowell Glasdrumman, Cathleen Garland Dundrum, Aoife Trainor Clonduff and Niamh Savage Portaferry in this tightly fought competition, you could have heard a pin drop when these girls performed, and it was Aoife Trainor who emerged County Champion at the end of the evening.

Staying with the Solo competitions this time it was reciters Jack and Brian McGreevy Clonduff, Beibhinn Watson Ballycran and Aoife Sands Saul who entertained the very appreciative audience in another very high standard competition and Clonduff collected their second County title, when Brian McGreevy was announced County Champion.

Ballad Group was the final competition of the first half, the standard was simply amazing, the work and arrangements the four clubs Glasdrumman, Saul, Clonduff and Portaferry had put into their two songs was fantastic and it was certainly a tough competition to have to pick a winner.

It was with tremendous delight to all in Glasdrumman when they were announced County Champions another first County title for them in their club history.

Half time was a much appreciated break for our adjudicators as the pressure was all on their shoulders trying to get winners from the amazing standard they had witnessed in the first half and the second didn’t disappoint.

Leíruí Statise had clubs Saval, Rostrevor, Clann na Banna and Drumaness perform acts on our history and culture. Many young actors were involved in this competition and Drumaness proved to be the favourite of the evening, claiming County honours for their club.

Instrumental Music was another amazing competition. Dundrum, Darragh Cross, Clonduff and Glasdrumman provided some excellent playing of traditional music. Toes tapped and at one stage the audience were nearly on their feet ready to dance as the atmosphere was superb.

It was Glasdrumman who lifted the roof when they were announced as county champions again, another first County title in this discipline for their club.

The final competition of the evening was Set Dancing.

There was another fantastic display of dancing again from some very young competitors from Clonduff Football and Camogie teams along with Ballyholland.

What an end to a wonderful County final with Clonduff emerging County champions winning this discipline for the first time in over 16 years and adding a third County title of the evening.

Winners will now progress to Ulster semi-final in Silverbridge GAA complex this Saturday, 1 December at 4pm where they will compete against County Champions from Monaghan, Donegal and Armagh.

Congratulations to everyone who took part in an amazing Down County Scór na nÓg final.