Mayobridge club history made by Mairead 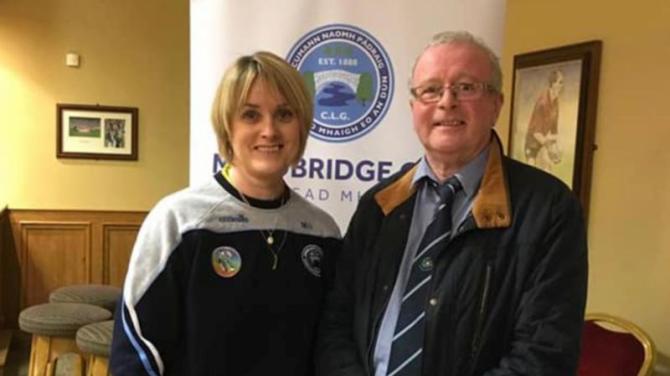 MAYOBRIDGE GAC has appointed its first female chairperson in the club’s 130-year history.

Mairead Rooney, who is originally from Ballyholland and has been living in Mayobridge for the last 15 years, was elected as chairperson last Monday (26 November).

The Mayobridge woman will hold the post for three years with the potential for five, and was appointed along with a new club committee.

Mairead is married to the current Down GAA Chairman, Sean Rooney and says her family is “passionate” about the sport.

She said: “I was associated with Ballyholland GAA before I got married and have been with Mayobridge club ever since then.

“I was delighted to be appointed as chairperson and have been vice-chair for the last two years and being appointed was a moment in history for the club.

“I am very honoured by it and people have been so good to me since I have taken on the job.

“I have always had a love for GAA and the new vice-chairman to be appointed was Gerard Keenan, who again comes from a very passionate GAA family.”

Mairead says she is now looking forward to diving head first into her new position.

“I want to keep on the good work of the men before me and keep the club going from strength to strength.

“Mayobridge is a very active and busy club and I know this will be a very rewarding role and we have lots of things going on within the club.”

Mairead has also been heavily involved in the camogie side of the club since 2009.

“Myself and my sister, Bridgeen Coulter and two other girls, Marie Sherry and Roisin Gallagher, started the camogie side of it back up then.

“It had lapsed for a few years before that and it is now going very well and that is lovely to see,” she said.