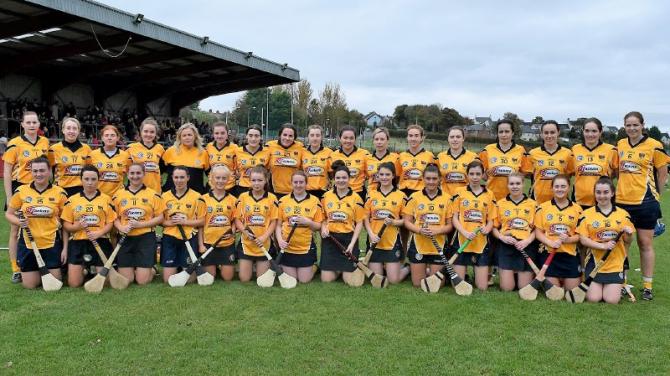 Clonduff Senior Camogie team will take on the Waterford and Munster champions, Gailltir in the All Ireland Intermediate Club final.

CLONDUFF Senior Camogie team is set to make history as the first team in Clonduff GAC’s 131-year history to represent their club in a sports code in an All-Ireland final in Croke Park.

Clonduff GAC is nestled on the banks of the River Bann at the Gateway to the Mournes in County Down; its club members come from the neighbouring villages of Hilltown and Cabra.

Over the winter months, there has been an air of quiet determination, focus and hard work at the club’s fields, gym and clubhouse as the camogs prepares to compete against Gailltír of Waterford for the AIB GAA All-Ireland Intermediate Camogie Club Championship title.

Camogie at Clonduff dates back to 1967, its success over 52 years has earned its reputation as one of the top clubs in County Down and Ulster, winning six Senior Camogie County Championships and two Ulster Camogie Club Championships.

Clonduff captain, Paula O'Hagan has said she can't wait to lead the team out onto Croke Park.

The Clonduff Camogie Senior panel has 32 players who altogether have already earned three Soaring Stars, four Senior All-Stars and seven College All-Stars. Ten of the team, including captain Paula O’Hagan, were on the Down panel which met Cork in last year’s All-Ireland intermediate final.

Paula O’Hagan, focused on the final from a captain’s perspective, said: “It is one thing playing in Croke Park for your county in the red and black jersey of Down but I can’t describe how much it means, to all the players and for me personally, to lead the team out on to the hallowed ground of Croke Park as captain in the yellow jersey of Clonduff.”

The Clonduff Camogie Senior panel has six pairs of sisters, a new mother of a six-month-old baby and teachers and pupils playing together, all supported by a husband and wife team and committee of mothers, sisters and sisters-in-law.

Leading up to the final, the club has been supported financially, technically, practically and in spirit by the whole community including Clonduff parishioners, families, businesses, community groups, the two local primary schools St Patrick’s PS, Hilltown and St Paul’s PS, Cabra and Clonduff’s GAC diaspora in the USA.

“They can see if they work hard together as a team they too can achieve their dreams on the pitch shoulder to shoulder with their friends and team mates.

“We are overwhelmed by the support of the whole community with 800 at our last big breakfast and 570 match tickets sold on one night alone, we want Croke Park to hear all the ‘Yellas’ roar!”

Camogie is a family-affair for Guinevra McGilligan (nee Carr) as Clonduff Camogie Club chairperson, her husband Alastair, senior team co-manager with Damien Farnon, and both their daughters Clare and Katie McGilligan on the team.

Fionnuala Carr, Clonduff camog and Women’s Gaelic Players Association (WGPA) Down Executive member said: “It’s great that women’s GAA sports are becoming more visible and are beginning to get the recognition they deserve for all the sacrifices made and commitment given by each and every athlete, mentor and manager.

“The friendship, development and sense of well-being that comes with being a Clonduff camog is second to no other team I have ever played with.

“It is significant that this year UNESCO added hurling and camogie to their list of protected cultural activities around the world. The profile of camogie continues to grow globally but it all starts within your own family and local community.”