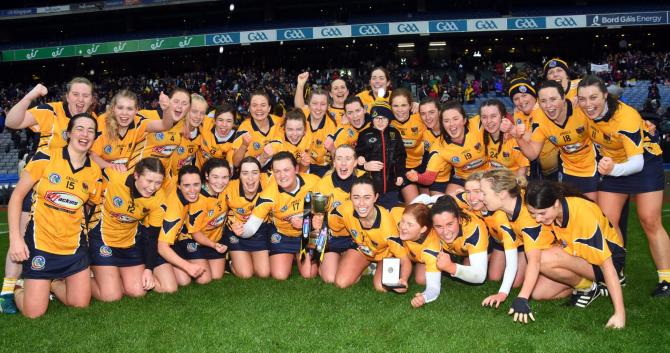 CLONDUFF camogs have created their own special place in the 131-year-old history of Clonduff GAA.

With their win over Gailltír in the AIB All-Ireland Intermediate Camogie Championship, the yellas lifted the Agnes O’Farrelly Cup and with it the hearts of all their supporters, both in Croke Park and at home.

Camogie was introduced in Clonduff for a second time in 1967 - it had a short reign in the early 1950s - but this time it was here to stay. They enjoyed much underage success throughout the years but it took them to 2007 to win their first County Senior Championship and they have been regulars there since.

In 2014 they annexed the Ulster Junior Club title and moved up to Intermediate level. Last year they were beaten by Eglish (Tyrone) by a single point in the Ulster final. They met the same opposition again this year and the tables were reversed.

They met the Connaught champions in the All-Ireland semi-final back in January and in a very tight game they emerged victorious, knowing that a visit to the hallowed turf of Croke Park awaited.

On Sunday, 3 March that wait was over! In the meantime they trained and worked extremely hard to hone their skills, thanks to managers Damien Farnon and Alistair McGilligan, assisted by Derek Dunne, Ciarán Kearney and Aaron Graffin.

The final on Sunday was played in atrocious conditions - the rain was unrelenting making for poor underfoot conditions and leading to ball-handling errors from both sides (the Senior final, played immediately after the Intermediate, finished the game with heavy snow falling).

Clonduff flew out of the blocks and had registered five points before the Waterford girls got off the mark in the 15th minute.

Once they got into their stride though they pushed the yellas very hard and at the break the score was 0-7 to 0-5 in favour of Clonduff.

But that doesn’t tell the full story of that half - captain Paula O’Hagan (nee Gribben) led by example in harnessing a superb performance from every girl on the field.

One of the big talking points, a video of which has gone viral, was Fionnuala Carr collecting a ball outside the half-way line and taking aim and firing over a monstrous point. The other big talking point of the half also involved Fionnuala who, along with her cousin Clare McGilligan and goalkeeper Karen Haughey (nee Gribben), saved a penalty with the last puck of the game. If converted that would have put Gailltír into the lead for the first time.

Gailltír had scored the last three points of the first half without reply but the second half followed a similar pattern, with Clonduff dominating the third quarter and scoring two points against the elements.

Gailltír dominated the game from then on and should have scored a couple of goals but for the strong defending and goalkeeping skills of the Clonduff girls.

They scored the next three points to make it a one-point game before Paula O’Hagan fired over another long-range free but in injury time Gailltír scored another to again reduce the deficit to a single point.

The Clonduff girls dug deep to keep the sliothar away from goal and when the final whistle sounded a collective sigh was audible around Croke Park just for an instant before the huge contingent of Clonduff supporters (five bus loads had left Clonduff club on Sunday morning, with the team bus having departed earlier) responded to what this bunch of sporting heroines had just achieved!

Captain Paula accepted the Agnes O’Farrelly Cup on behalf of her team-mates. She was also selected as the player of the tournament but indeed any number of girls could have received this accolade.

It is a day that will live long in the memory of all those who witnessed it in person or tuned in across the work to the AIB YouTube channel.