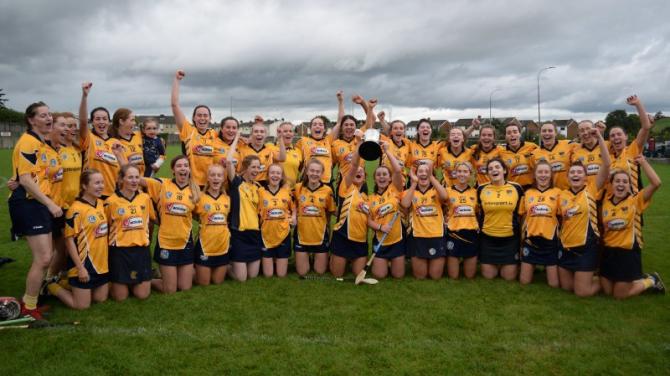 CLONDUFF’S Senior Camogs had their All Ireland title on the line on Saturday afternoon, 28 September.

The Yellas faced a lively Portaferry in the County final in Drumaness who lost out in last year’s final by a single point.

The sun shone down on the immaculate St Colman’s Park and the juvenile Camogs of Drumaness formed a guard of honour for the teams entering the field.

Paula O’Hagan got the first score of the game from a free and this was quickly followed by a Sara Louise Graffin goal.

Player of the Match, Sara Louise Graffin, is presented with her trophy by Paddy McGrath

Portaferry’s Niamh Mallon was in fine form and she kept her side in touch - the half time score was Clonduff 1-8 Portaferry 0-6 - not a big lead in terms of camogie.

The second half was very much ‘even-Stephens’ until the final 10 minutes when Clonduff pulled away. Both teams’ defences were very solid and the free-takers very much on their game. It was probably Clonduff’s All Ireland experience that was the difference in the two teams.

Down Camogie Chairperson, Helen McAleavey (Clonduff) thanked both teams for a very sporting and entertaining game.

She announced the ‘Player of the Match’ award - Sara Louise Graffin and it was presented by Paddy McGrath, Down Camogie Development Officer.

Clonduff captain Paula O’Hagan then accepted the Cup on behalf of her team. In her acceptance speech she paid tribute to the gallant Portaferry team advising them to stay with it and with youth on their side their day was not far off.

She also thanked her team-mates for the commitment they had given to training and likewise the management team of Damian Farnon, Alastair McGilligan and Aaron Graffin, without whose guidance they would never have made the three-in-a-row for the first time in the club’s history.

The curtain-raiser to the senior final was the U14 decider between Clonduff and Ballygalget.

This was a very close encounter. Clonduff had a two-goal advantage at the break leading 3-1 to 1-1.

The Ards side fought back in the second half and reduced the deficit to a single point at 4-3 to 4-2 but Clonduff hung on and added the final two points of the game to become champions on a score of 4-5 to 4-2.