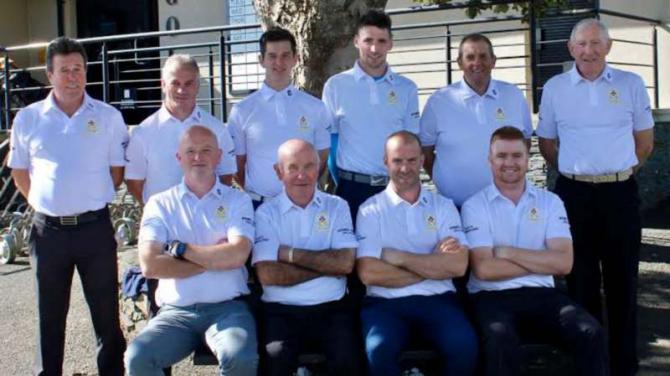 Having played on the successful 2013 team I accepted the offer, knowing I still had a platform to work on as Nigel Cochrane, Sean P. McVeigh, Sean O’Hare, Declan Fitzpatrick and Cathal Sloan were still eligible. So I went about getting a panel together.

Spa were up next in the quarter finals and again it was another step up for the team and they played great golf to secure this match. I brought Sam Gordon and Gregory Forsythe on board and they proved their worth to the team.

The semi-final first leg in Kilkeel against Tandragee was always going to be crucial. First out Michael McAnulty and Peter Collins and as in all their matches, they won 3:2.

Gregory Forsythe and Simon Lawrence were out second and played excellent golf to win 4 up.

The third pairing of Sam Gordon and Enda Murphy were finding things very difficult and were 3 down with five to play. I believe Enda’s second shot into the 14th changed this match and our chance in this semi-final immediately.

Gregory got a hold on the gauntlet and played some great golf with Enda, to win the last five holes to win 2 up.

Damian Grant and Nigel Cochrane were out fourth and as always, Damian and Nigel won 5:4. At this stage Sean McVeigh had been Damian’s partner, but couldn’t play and were unbeaten in their match.

In the return leg in Tandragee we knew it would not be easy. I made no changes and all played well, but Sam and Simon caught fire and finished the 5:4 winners.

Next up in the final was Rockmount, last year’s winners and unbeaten in two years, and I now know why.

In Kilkeel in the first leg Michael and Peter set off and played excellent golf, as did their opponents. The match went to the 18th, at which we secured a 2 up win.

Simon and Cathal were out next and fought gallantly, but their opponents were on fire and we went down 7:6.

In the third match were Enda and Gregory and this proved a hard nut to crack, but as always, this pairing matched their opponents to secure our second point on the 18th, 1 up.

In the fourth match were Damian and Nigel. They got off to a flier and were 4 up after 6. But again, due to the opposition, they got back level and it was all to play for.

This match was crucial to the end result and one we dare not lose and thankfully, the boys won on the 17th.

Now 3:1 up and two holes down heading to Rockmount the following Sunday. We were blessed with a beautiful day to play the final leg.

Rockmount fancied their chances as we needed to get one and a half matches. Given how the matches were tight in Kilkeel, we knew what we needed to do.

Michael and Peter were out first and when Michael almost drove the first holes, it gave us more hope. But it was Peter who birdied it with a long putt.

Both players played out of their skin and looked like securing that vital point, both on the 17th in two.

It was looking good, but as in all sports, nothing is assured. Lo and behold, Rockmount chips in for a birdie and Michael and Peter miss their putt.

So it’s down to the 18th and we have to give them a shot. Michael played this hole well and nearly won it.

So that was a half match and we needed a match somewhere.

By this stage Simon and Sam had succumbed to their opponents. In the third match Enda and Gregory were in a titanic battle, never more than one hole either way. But they got in front on the 16th, half 17th and went down at the 18th with the half point in the bag.

Could they hold their advantage, giving their opponent a shot at the holes? But this proved too much and another half match.

It was a case now that we had to get something out of the last match.

Damian and Nigel as a pairing were unbeaten and Damian was unbeaten when paired with Sean. I got to this match in the 13th, where Damian got up and down out of the bunker to win and go 2 up.

This is where I thought we were going to win the trophy, but unlike Nigel, he 3 putted to half. 1 up, 3 to play and Rockmount felt let off the hook.

The boys hit two cracking drives, so it was down to the second shot. Nigel tried to hold it into the wind and plugs into the bunker. Damian drifts in the wind and into the rough on the other side.

Rockmount made the green in 3, but a good distance away. Nigel cannot get out of the bunker in one. Damian played an excellent shot out of the rough to 16 feet.

Rockmount putted and missed the hole and now Damian had to putt to win this hole. He putted it to 9 inches and the jubilant Kilkeel team let their emotions out.

Back at the clubhouse Kevin, the Rockmount captain, and his team were very gracious in defeat and treated us to a beautiful meal and drinks.

As team captain, on behalf of my team, I thank Rockmount for making this occasion a great thrill. Thanks Kevin, I hope our paths cross soon.

I would like to thank Anachem and Joey Annett, Botanica Cream, rep Billy Hogg, Smith Stonemasonry, Conrad Smith for their sponsorship of the team’s t-shirts. Thanks to all those who supported us in the competition.