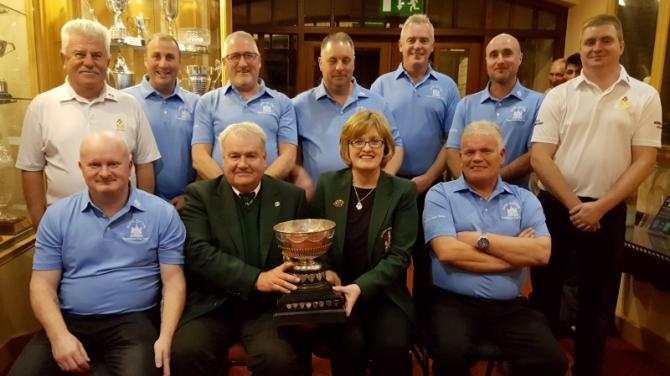 A PRIZE presentation was held at Kilkeel Golf Club.

The captain Austin Crawford thanked the sponsors for their generous prizes.

The competition, sponsored by Davin Ltd. (David McCartan), was held on 19 and 21 July.

The next competition was held on 9 and 11 August and was sponsored by Wilsons of Rathkenny.

Country Fried Chicken Downpatrick’s competition was won by Edward Haugh with 40pts. Gary Uppington and Richard McBride got second and third prizes and Kieran Poland returned a score of 75 to win the Gross.

A Stroke competition, sponsored by Eoghan Sheehan Accountant, was held 30 August and 1 September.

Kieran Poland took first place with a 66 nett beating Jamie Lowey into second place by one shot, followed by Martin O’Neill with a 69 nett. Frank Reilly shot a 77 to secure best gross.

A very successful fundraising event was held at the beginning of September.

A variety of prizes were presented by the main sponsor, Hugh McCulloch of Condensation Solutions.

Longest drives for both Ladies and Gents were collected by A. Macauley, A. Higgins, C. Quinn J. Quinn, G. Orr and R. Doran.

The captain thanked everyone who contributed to the success of the fundraising event.

He praised the new caterer David Irvine - trading as Hunters Moon on the excellent meal, wishing David every success.

The night concluded with a Night at the Races. The captain thanked Shane Lowey for the success of the event.