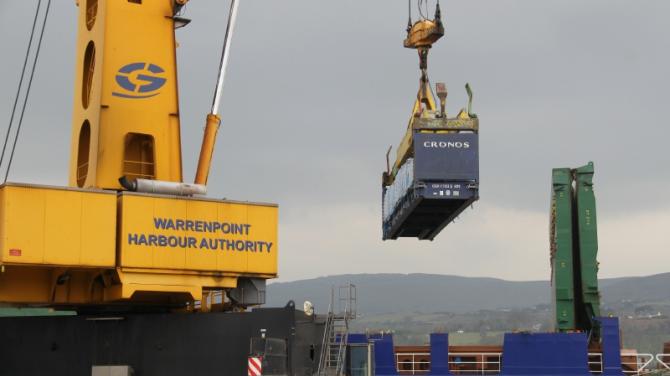 A DREDGING proposal for Warrenpoint Port will not go ahead if it is found to have a detrimental environmental impact.

That was according to Clare Guinness, chief executive of Warrenpoint Port, following a recent public consultation on the proposal.

A “robust exchange of views” was heard at the largely attended meeting on Monday (15 October) at Warrenpoint Town Hall.

It was attended by staff from Warrenpoint Port and its consultants, Royal HaskoningDHV.

The meeting was used as an open drop-in event to allow members of the public and other stakeholders to learn more about proposed changes to how dredged material from the harbour is dealt with.

It is proposed that dredged material is placed at a site at the mouth of Carlingford Lough between Cranfield Point and Greencastle.

The port currently carries out a major dredging programme every two to five years with material disposed of in the Irish Sea.

However, plans have been put forward to carry out dredging on a more regular but smaller scale at the new proposed site.

A number of surveys, studies and assessments are set to be undertaken to determine the suitability of the location.

Christine Gibson, chair of Keep it Green, who was at the consultation said the environmental group does not agree with the proposal.

She added: “We’re for a sustainable development and one that doesn’t affect the environment and that it’s sustainable, economically and socially viable.

“We don’t accept the viability of the business case of this project. This is due to the fact the CEO is concerned about saving £15,000 per annum with this proposal and the consultation is costing £200,000.

“And since the port is not intending to address the dredging exercise we do not have trust in the assessment that’s being carried out.

“All the environment groups are not happy because we don’t think the assessments are not being carried out properly.”

Ms Gibson told The Outlook that Keep it Green have a number of major concerns about wildlife in the area if the proposal goes ahead.

“As the port has claimed they are ‘custodians of the marine environment’ we find it irrational and irresponsible to choose Greencastle as the disposal site for dredging material.

“It seems that they have lost the faith and trust of the people and they need to rebuild the trust.”

The environmental campaigner says a responsible way forward would be to start the process again.

She continued: “This could be achieved by engaging effectively with all those who would be affected and then carry out the proper assessment under EIA (Environmental Impact Assessment) development.”

Meanwhile, James McArevey, PRO for Newry Maritime Association, was also there for the duration of the meeting.

The local man said opposition to the dredging proposal was heard “loud and clear” from a number of groups in attendance.

He said: “The plans have caused a lot of concern and it was one of total opposition from various groups from around the lough and there was a united feeling of opposition.

“Love your Lough, RARE, Dundalk Sub Aqua Club and Louth Adventures were some of the groups that were there. They made their views very clear that they do not want this.”

Mr McArevey said he did not hear one person express support for the proposal.

“I have no doubt that this was also an accurate reflection of the wider community in the area too.

“Personally I would be a supporter of the port and recognise its role as a key economic driver in the region, but I would have grave concerns about the cost-cutting proposals that were presented from an environmental point of view.

“There was a robust exchange of views at the consultation and people were united in their opposition,” he added.

The PRO officer said people at the meeting raised many concerns about the environmental impact of the proposal.

“They seemed absolutely bewildered that the harbour authority would even go down this route and it has the potential to have adverse serious environmental effects.

“We were told it was a cost-cutting exercise and this is what it’s all about, but at what cost to the environment?

“People at the meeting wanted to know if there would be an EIA (Environmental Impact Assessment) carried out.

“However, the authorities said they didn’t need to do one, they said they would do a study as good as that, but that wasn’t accepted by the body of people that were there.

“Charts had been laid out with a map of the proposed dumping site which is only 600 metres from a protected area.

“It would spell disaster in the lough, even with the dispersal of the stuff that would wash in at the beach in Cranfield and there is the potential for environmental disaster,” he said.

Mr McArevey hopes the chief executive from Warrenport Port takes on board the views that were expressed from the meeting.

He continued: “I never heard one person at the meeting say ‘that’s a good idea,’ there was 100 per cent opposition.

“I would be a good supporter of the port, they have done very well in the last few years and are important to the local community, but they must be aware that they are in the community in Warrenpoint and they must be mindful of the views of them.

“I think it has been a poorly executed strategy and I hope that common sense will prevail and rather than get into any conflict with the local community, abandon this project all together.

“The Harbour Authority needs to be careful that they do not lose the trust and goodwill of the local community as that could be very hard to rebuild.”

Meanwhile, the chief executive of Warrenpoint Port said the drop-in consultation was a useful way to gauge public opinion regarding the proposal.

Ms Guinness added: “We welcomed the opportunity to meet with members of the public and other stakeholders in what was a very useful exercise as we engage on our proposals for a potential new placement site for dredged material.

“We look forward to holding a further informal public event following the completion of the surveys, the results of which will be made publicly available in advance.

“Should it be found the plans would have a detrimental environmental impact, we will not proceed with this proposal.”

Ms Guinness said the public are encouraged to submit questions to Warrenpoint.placement.site.characterisation.Study@rhdhv.com by Wednesday, 31 October.

Key points will be summarised and published along with answers on the Warrenpoint Port website in the coming weeks.