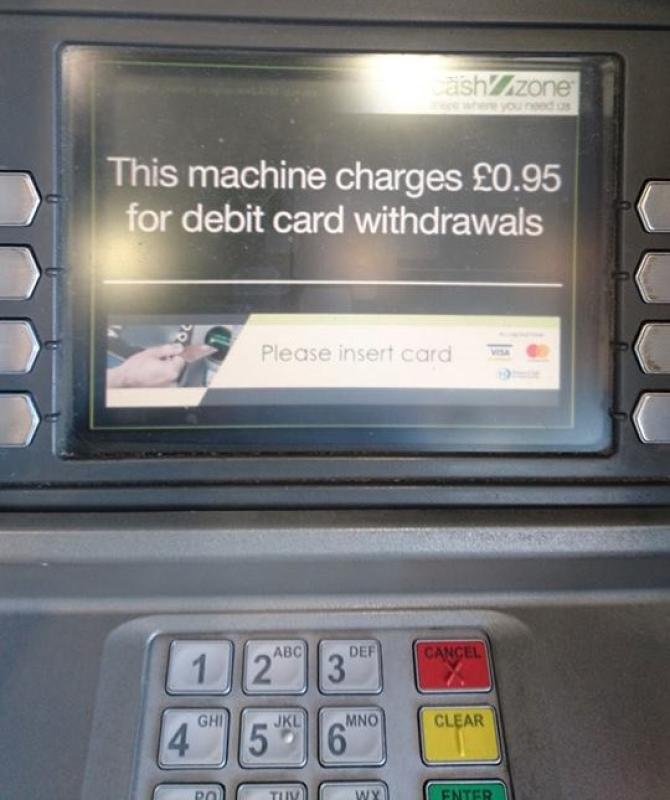 The ATM operator who now charges 95p on withdrawals from its cash machines in Rathfriland and other towns has defended the change.

Shoppers in Rathfriland were left angry at the start of this week after the several Cashzone ATMs in town started charging customers for taking money from their debit accounts.

But a Cardtronics spokesman, who represent Cashzone, says they were left with "no choice" as many of the free-to-use machines were unsustainable.

"The decision on whether to introduce a fee is taken on a case-by-case basis and reflects the economic viability of the individual machine," the company spokesman said.

Eurospar on John Street is one of the businesses affected. Owners, the O'Hare family have apologised to customers for this inconvenience.

The owners, who are seeking legal advice on the matter, maintain that they "were not informed of this change nor do we agree with it as we feel it is very unfair to our customers".

A Cardtronics spokesperson told The Outlook: “On 1 January, LINK, the UK ATM Scheme, introduced the second in a series of cuts to the fee that banks pay ATM operators for cash withdrawals made by their customers. Independent ATM operators such as ourselves often fill the gap left as a result of the banks closing branches and removing their own ATMs but these cuts have made some of our ATMs unsustainable as a free service.

“The decision on whether to introduce a fee is taken on a case-by-case basis and reflects the economic viability of the individual machine. Introducing a charge is not one we have taken lightly, but LINK's cuts have left us with no choice on some of our machines. This is why we are asking the Payment Systems Regulator (PSR) and the Financial Conduct Authority (FCA) to instruct LINK to withdraw this second interchange cut and put a halt to the damage being done to our ATM network while we find a sustainable long-term solution.

“We would advise anyone concerned about this to sign the 'Freedom to pay. Our way.' petition on the Which? website and speak to their MPs,” said the spokesperson.

Rathfriland's only remaining cash machines are within EuroSpar and The Milestone after Ulster Bank withdrew its ATM before Christmas 2018.