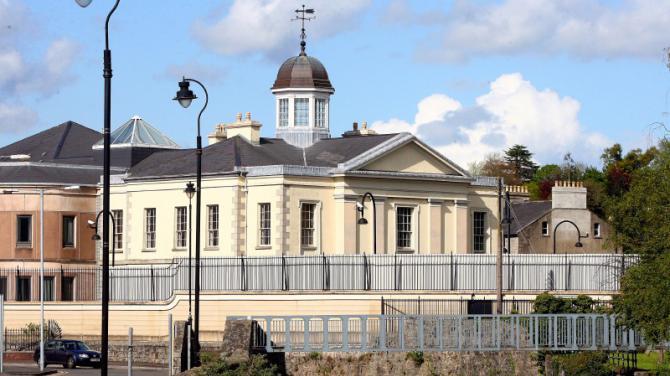 FOUR men, three of them teenagers, have appeared in court charged with attempted fraud by false representation at a shop at Banbridge's Boulevard shopping centre.

The four were arrested on Tuesday following an allegation of an attempt to defraud the Timberland store at the outlet centre of £500 worth of items.

Each was charged with one count each of attempted fraud by false representation and possessing an article in connection with fraud.

Three of the four had addresses in the Republic of Ireland, two of which in Dublin and the other in County Meath, while Haughan was listed as residing at Coolcullen Meadow in Enniskillen.

Banbridge Magistrates' Court heard that on Tuesday afternoon, 24 November, Police received a report from The Boulevard that four males had been trying to purchase goods worth £500 by inputting numbers to a credit card machine from their phones.

Staff challenged them and they left in a car, the registration plate of which was noted by staff.

The vehicle was stopped in Newry city centre and the four accused were in the vehicle.

A police officer alleged that the four accused "appear to have obtained photographs of a receipt from a credit card and each had different numbers and expiry dates.

"They lifted them and attempted to pay for the items using those numbers by inputting them directly to the credit card machines."

He told the court that 40 such images had been found on one phone and 45 different ones were found on a further phone. He said there were three further mobile phones to be examined.

The court was told that each of the four gave either a "no comment" interview or simply refused to answer any questions.

It was also stated there were outstanding bench warrants out in the Republic for the arrest of both Maughan and Mongan, while Martin O'Donnell is "wanted for questioning" in relation to the alleged theft of two iPhone 12s the day prior to these allegations.

The police officer, who objected to bail being granted, stated that police "believe they were in the area of the Boulevard for a number of hours" and said they were "still to find out what other stores they were in".

Defence counsel for the quartet explained to Judge Copeland the differing ways in which one can pay using a credit card in Northern Ireland to the Republic of Ireland.

He stated: "When a person uses a credit card machine they use chip and pin or, if they wish, they can enter the number. In Northern Ireland, you need the postcode of the card owner. But, with no postcodes in the south, the staff usually ask for some form of ID.

"They were clearly unaware you needed a postcode up here to do that and fortunately staff in shops are well trained not to accept payment without the physical card.

"It was a relatively unsophisticated attempt. Had they got a step further they would have been asked for a detail of something they simply didn't have.”

Their defence stated each of the four men's parents were willing to put up a cash surety of £500.

"That, together with the fact that some of you are unlawfully at large and have demonstrated a defiance of court orders in the Republic, means I will be refusing bail."

All four were then remanded in custody to Hydebank and the case is next to be heard in court on 17 December.