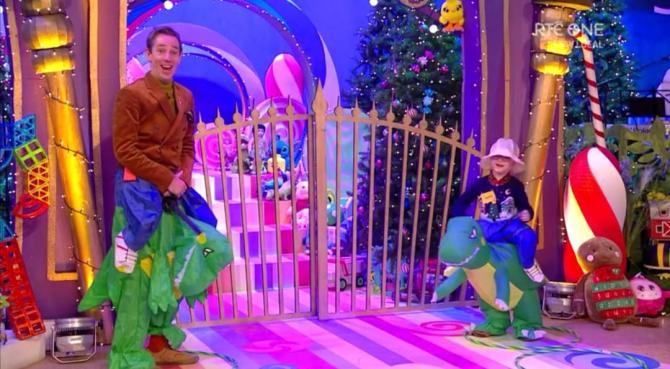 Jayme trying out some of the toys with RTE presenter Ryan Tubridy.

A YOUNG Cabra boy has become a local celebrity having made a wonderful appearance on the long-running Late Late Toy Show last weekend.

Six-year-old Jayme Trainor's memorable performance on the much-loved RTE show has earned him some new fans at home.

Indeed, being a proud Cabra boy, Jayme made sure to keep presenter, Ryan Tubridy in check, telling Ryan he's from Cabra and not Newry!

As his mum, Bronagh explained to The Outlook, Jayme found the whole experience to be very exciting.

“That is just Jayme, he was just doing what he normally does. He has been getting lots of comments online and he's totally oblivious to it all," she said.

“He was not really nervous, just excited and overwhelmed in the rehearsal that morning.”

Jayme and his parents, Bronagh and Paul travelled down to Dublin on Friday morning (27 November), where RTE had provided a hotel for the family.

“We had to be there for 10.30am for the rehearsal and then we had the rest of the day to ourselves at the hotel, before going to the studio that night,” said Bronagh.

“Only one parent was allowed to go to the studio with him, so my husband Paul stayed back at the hotel with our baby. The studio was very strict with their social distancing, hand sanitisers and masks.

“The other families only came in when it was their time and then we had to leave straight afterwards.

“We just enjoyed the whole experience, we didn't have anything to compare it to. Some others were saying how different it was compared to other years, but we just loved it from start to finish.

“Jayme was brilliant, even clipping the microphone onto him, he couldn't believe it was about him. He was a bit overwhelmed with all the cameras, but he loved it all and that's why they do the rehearsals, to get them used to all the cameras and moving around.

“It is just such a surreal experience and we never expected him to be called.”

Bronagh's sister, Katie had been looking after Jayme during lockdown and decided to submit a video of him to the applications for the Toy Show.

“She would have been making wee videos of him playing with Lego and talking through the toys, saying what he was doing,” said Bronagh.

“They were sent to his friends and cousins for the craic and that's what it was. She sent one of those in to RTE, there was nothing set up about it, it was Jayme talking through the toys.

“She sent it in and we thought nothing more about it. Then we just could not believe it when he was invited down to audition in October, we got the call to say he was in the final 50 out of 5,000 applicants.”

Bronagh said that she couldn't get into the audition with him, so she has “no idea what he said or did in it”.

“Then we got the call to say he was down to the final ones.”

Jayme, who is older brother to Shea (3) and seven-week-old Dara, was “so excited” with the support he got from St Paul's Primary School, Cabra where he is a Primary 2 pupil.

“The school was delighted, the support from the school has been absolutely brilliant.

“They sent him a wee video wishing him luck and that is what meant the most to him. He just couldn't believe it and loved watching it over and over again.

“It was all just a really great wee bit of fun for everyone and he is away to school today a very happy boy,” she added.