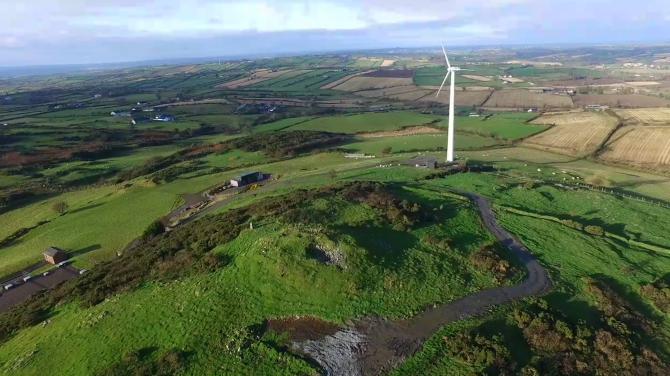 The controversial turbine at Knock Iveagh.

THE Friends of Knock Iveagh have expressed their delight at receiving the backing of the local council in their campaign to have a wind turbine at the historic Knock Iveagh removed.

Armagh, Banbridge and Craigavon Borough (ABC) Council ruled that it is having an adverse environmental impact on the integrity of the setting of the scheduled monument at Knock Iveagh and the visual amenity and landscape character of the site.

The council will now be writing to the Department for Infrastructure (DfI) requesting that it uses its legal powers to discontinue the use of the land for wind energy generation, and to specify steps for the removal of the turbine.

And the Friends of Knock Iveagh say they are "extremely keen that the DfI commence this work without delay".

At a special meeting of the council last week, members unanimously agreed the turbine should be removed and that the Department for Infrastructure should foot the bill for the removal of the turbine.

The Friends also criticised the length of time it took the council to get to this point.

However, the council stated that "due to the complexities of this case, it was necessary for council to thoroughly investigate and consider this matter in detail. This required input from a range of specialists which inevitably meant the matter taking longer than would have been hoped."

The council said it would be "seeking full reimbursement for all associated costs attributed with this process" of having the turbine removed.

Speaking following the ruling, the Friends said: "Before the turbine was erected, the Friends of Knock Iveagh and the Historic Monuments Council each wrote independently to ABC Council and the Department for Infrastructure confirming that both had the legal powers required to stop the turbine being built and explaining why it was important that they use those powers without delay.

"Despite this, the development proceeded, resulting in further damage to Knock Iveagh. Three very costly years later, ABC Council have finally reached the same conclusion - that the turbine must come down.

"Now that the Council has officially stated its intent to request the Department of Infrastructure take steps to discontinue the use of the land for wind energy and specify steps for removal of the turbine and works at the site, or to exercise its powers of enforcement, the Friends are extremely keen that the DfI commence this work without delay, with the active involvement of the Department for Communities’ Historic Environment Division archaeologists.”