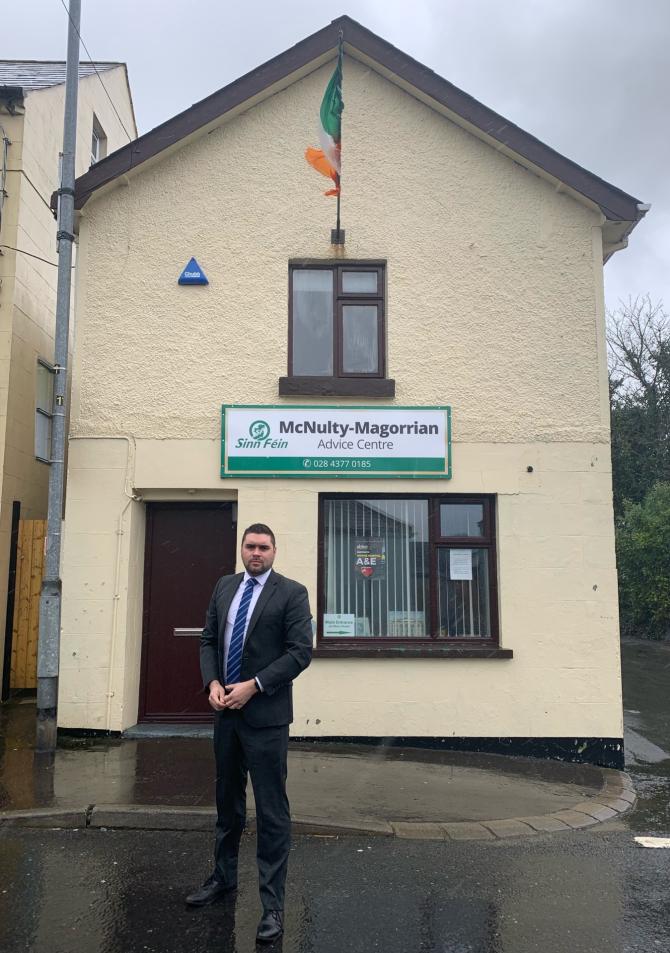 THE Sinn Fein office in Castlewellan, used by South Down MP Chris Hazzard, has been reported to the Equality Commission.

Councillor Alan Lewis, an Ulster Unionist representative on Newry, Mourne and Down District Council, has made the report.

He has contacted Chief Commissioner at the Equality Commission, Geraldine McGahey, asked that the commission "consider and advise if it is appropriate for a publicly funded parliamentary advice office to be named in dedication, and display signage honouring the memory of two proclaimed terrorists".

The office, located at 2 Circular Road in the town, is named after Peter McNulty and Paul Magorrian, both of whom are recorded on the IRA’s roll of honour. McNulty blew himself up on 26 January, 1972 while attempting to bomb Castlewellan police station, Magorrian was shot by an army unit as he lay in wait to ambush them at Bunkers Hill in the town on 14 August, 1974.

Speaking after making the report, Cllr Lewis said: “I accept this issue has been going on for some time, I am conscious it has been in the news on many occasions. However, for the people of South Down, especially the innocent victims, this issue hasn’t gone away.

"The signage stands as an ever-present insult to the memory of their loved ones and a glorification of terrorists who bombed, shot and maimed their way around this constituency.  As local councillor, it isn’t within my gift to simply ignore this blatant attempt to glorify terrorism.

“The majority of ordinary, decent, law abiding residents consider Hazzard's office to be out of bounds as they rightfully see its naming as an abhorrent abuse of power, and not in keeping with the values and responsibilities which come with his elected position.“