Castlewellan man Piaras fighting deforestation one tree at a time 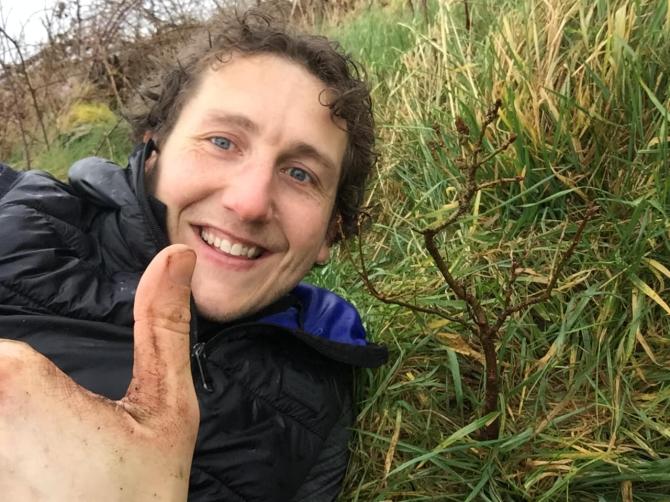 Piaras Fitzpatrick has hit the landmark of planting 100 trees.

A CASTLEWELLAN man is fighting deforestation by devoting his free time to planting trees in his home town's forest park.

The Bunker's Hill trail in Castlewellan Forest is a popular area for walkers and admirers of nature, but for Piaras Fitzpatrick it's also a place that brings back many fond childhood memories.

Last week Piaras celebrated the planting of his 100th tree. Since January, he's been going to the forest once a week to plant native trees in a patch of land that's been left bare. It's a project that he's taken on alone.

When the 33-year-old personal trainer first took an interest in environmentalism, he noticed the effects deforestation was having on an area close to home.

He says: “I think my reason for caring about this work is because I grew up around these forests and I have so many memories of playing there as a child.

“There's so little woodland left in the country and I want to provide a similar space for children today.”

This isn't the first tree planting project Piaras has taken on. In the past he has worked with members of Dolmens Climate Action Network to create a community orchard.

He says: “We got together and asked friends and family if they'd like to make donations towards the orchard and by the time we'd finished we had 12 apple trees.”

Northern Ireland is currently one of the least wooded areas in Europe, with only 0.04% of ancient woodland remaining.

Alongside his project at Bunker's Hill, Piaras says he also hopes to work with local landowners.

He added: “When you're out and about you notice that there's far more fields than there are trees.

“I'd love to link up with local landowners and see if they'd be interested in allowing me to plant trees, even along the hedges so they're not in the way.”

Although this has been an independent project for Piaras, he says anyone interested in getting involved is more than welcome and should contact him on Facebook.

He added: “The main goal is to expand forests as much as we can.”