‘Take care, be good and bye bye’ - Burren’s most famous son bows out after almost three decades with UTV 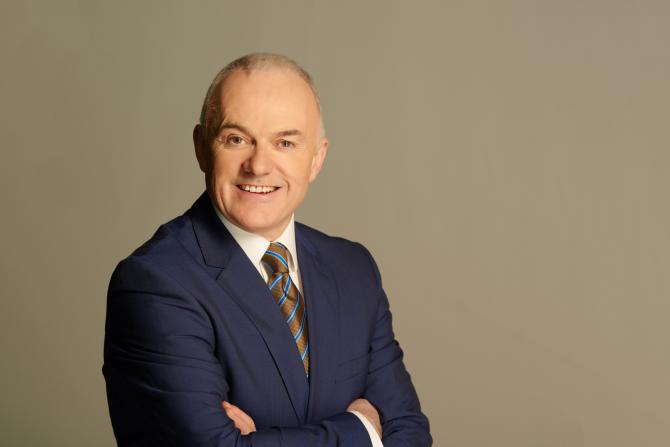 Burren's Frank Mitchell has retired from our screens after almost three decades with UTV.

IT IS the end of an era for everyone’s favourite weatherman, Frank Mitchell.

The iconic UTV presenter has graced our screens for three decades in a successful career which he said has never seen him “short of opportunities or short of enjoyment”.

The Burren man “through and through” spoke with his favourite local newspaper, The Outlook as he discussed his years on our screens.

Chatting about his professional highs and lows and a career that’s felt like an “exaggerated hobby”, he remarked that “you’ve got to quit at some point!”

Frank announced back in December that he planned to take voluntary retirement in spring of this year along with journalists Jane Loughrey and Ken Reid.

The 57-year-old has kept weather watchers guessing for an incredible 23,000 weather forecasts in his 27 years in front of the weather map.

“It has played such a massive part in my life and presenting the weather has been part of my daily routine for so long, so I am going to miss it,” he said.

Growing up on the Carrogs Road, Frank attended Carrick PS and went on to study at St Colman’s College in Newry.

He has fond memories of cycling his bicycle through the parish, helping out on his auntie’s farm and taking part in the variety of football teams which the village of Burren offered.

“I lived in Burren until the age of 22 and then moved to Belfast.

“If anyone asks me where I am from, I always say Burren.

“I am a Burren man through and through even though I’ve lived in Belfast for longer,” he added.

Frank’s mother, Lily McClorey who is over 90-years-of-age and his sister Teresa-Anne still live in Burren.

His other sister Eleanor lives in Dublin.

“I visit Burren as regularly as I can to see my mother and sister and to keep in touch with everything that’s going on at home.

“I like to have an eye on how Burren are doing at the football when they get the chance to play and there’s still that great feeling of association with the parish.

“Of course, I like to keep up to date with what’s happening and there’s no better paper to do that with than The Outlook.

“it’s a very popular paper and it’s been around for a long time.”

Frank had his first experience of broadcasting as a pirate radio DJ in Dundalk at the age of 17.

It was here that Frank received the pseudonym ‘Mitchell’ that would stick with him throughout his professional life.

Following this he moved to BBC where he worked as a radio producer and then transitioned to Downtown Radio as a presenter.

After that, he moved to UTV as a continuity announcer and wasn’t long in the role before his weather forecasting role commenced.

“It really came out of the blue by being in the right place at the right time," he says.

“I happened to be walking past the studio and the director said to me, ‘Frank we’ve nobody to present the weather, would you present it, and 27 years later I’m still presenting it.

“Now to get a job as a weather forecaster you have to go through a rigorous selection process.”

This marked the beginning of Frank’s UTV chapter which saw him presenting many memorable programmes and rubbing shoulders with none other than The Queen and Nelson Mandela.

The ‘School Around the Corner’ theme tune became synonymous with Sunday afternoons in the nineties, a show which aired for 11 years and proved to be a big hit.

“The show was hugely popular, and it was a great experience,” added Frank.

“I still get people stopping me today telling me they were either on the show or wanted to be on it.”

Other programmes included UTV Life which Frank presented for 10 years on the sofa and End to End, a Gaelic football programme with Adrian Logan.

‘Ultimate Ulster’ proved to be another hit with Frank counting down the country's Top 10 of everything.

As well as his appearance on screen, Frank began working for the separate radio station from UTV, U105.

But despite the many good times, Frank spoke empathetically about the low points in his career, recalling the many years of ‘The Troubles’ where his colleagues were faced with daily reports and news coverage of the unimaginable.

“When you are witnessing all that tragedy unfold being so close to a newsroom you can’t help but feel for the victims and also have a great respect for those who are covering the stories.

“Being so close to a buzzing newsroom and being part of an output team, even though I wasn’t covering the heavy, hard stories, I witnessed colleagues doing it and they did it with great professionalism.

“I’ve no doubt that it took its toll on them over the years.”

Frank explained that to him that was the only downside to his career and that thankfully the rest of it was “nothing but fun”.

“I had great opportunities throughout the years from having the Queen on the weather set to meeting Nelson Mandela in Dublin.

“I even received a letter from Liam Neeson asking if his father’s old school could feature on ‘School Around the Corner’.

“I had the opportunity to interview and be photographed with a survivor from the Titanic and all of those kinds of experiences are really special and amazing,” he added.

“There are so many opportunities that come up through television that you never expect to get.

“I even had the opportunity not only to play at Croke Park with Burren but to also commentate there was a real professional joy.

“I owe a debt of gratitude to television for all the opportunities I have had.”

Frank will continue with U105 on the phone-in every morning between 9am and noon and is looking forward to taking things easy after his departure from UTV.

“Working from eight every morning until 6.30pm is a long day and radio and television are two separate jobs requiring different skills, so it does feel exhausting.

“In the months ahead, I will probably get excited about a new project but in the meantime, it’ll be gardening and walking and keeping an eye on what’s happening in Burren,” he said.

“Presenting the weather has played such a massive part in my life for the past 27 years and it has been thoroughly enjoyable, but you can’t do it forever.