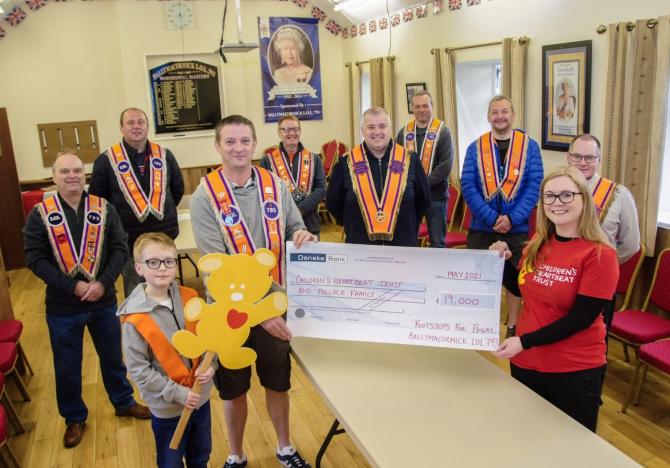 THE DROMORE community have rallied together to celebrate the success of their fundraiser for the Children's Hearbeat Trust.

The town's Orange Lodge teamed up back in November last year to support one of its members, Thomas Pollock and his wife Sarah after their son was diagnosed with a rare heart condition.

The couple's little boy Finlay was diagnosed with Restrictive Cardiomyopathy and Hypertrophic Cardiomyopathy which caused his heart to become enlarged and affect blood flow.

Due to the severity of his condition, Finlay is currently waiting for a heart transplant.

To raise awareness of Finlay's condition and raise funds for the Children's Heartbeat Trust, a charity which support the Pollock family throughout Finlay's treatment, Ballymacormick LOL 793 organised a sponsored walk.

Over £12,000 was raised from the 'Footsteps for Finlay' campaign. Worshipful Master Gavin Beck says he's delighted with the result of the community's effort.

He added: “Thomas has always been the type of person to do things for others and help other people in any way he can.

“We wanted to do whatever we could to support the family during this time and it's been great to see so many people showing their support.”

The participants made sure to adhere to social distancing regulations during the walk and decided to wait for restrictions to ease before holding a presentation.

Finally, this Saturday, the got together to present a cheque to a representative of the Children's Heartbeat Trust.

Gavin says: “We were limited with what we could do because of the pandemic but we wanted to make sure everything was done safely.

“I'm just glad we could raise so much for the charity as we never would have expected to raise such a large amount.”

Little Finlay has been in hospital for the past 7 months as his family wait eagerly for him to receive a transplant.

Gavin says the fundraiser has been a positive outcome from such a difficult situation.

He says: “The whole town have been amazing in showing their support for the Pollock family and doing whatever they can to help.

“As soon as we announced the fundraiser we had people coming by dropping off envelopes with donations and it's just been fantastic to see."