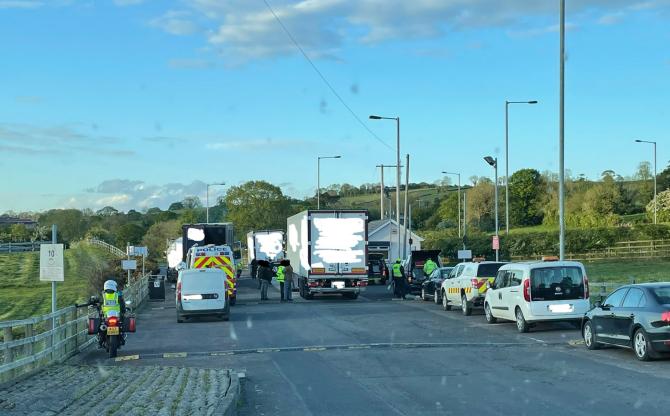 The seizure occurred on Wednesday afternoon on the A1 at Loughbrickland.

BAIL has been denied a man charged in connection with the discovery of almost £1 million worth of drugs at Loughbrickland.

The van being driven by Brian Anthony McDonagh, 41, with an address at Springfield in Cavan, was stopped during a joint PSNI and HMRC fuel check on the A1 at Loughbrickland on Wednesday afternoon, 26 May.

And while a search was carried out of the vehicle a total of 60 kilograms of herbal cannabis, valued at in the region of £900,000 was discovered in a total of 59 vacuum packed bags contained within six cardboard boxes.

McDonagh, Newry Magistrates' Court heard, believed he was transporting “knock off Canadian goose down jackets” and claimed he was unaware there was in fact drugs in the vehicle.

He said he had been told by a man called James to meet another two men at a lay-by in Ballinasloe in the Republic of Ireland and instructed to bring what he believed to be the jackets up to Nutt's Corner, where he would receive a payment of £500.

Police objected to the granting of bail to McDonagh, stating they believed there was a potential risk of further offending and of efforts to hinder the investigation.

Defence counsel John Rocks stated McDonagh would be willing to comply with any bail conditions imposed and proffered an address in Newtownbutler, near the border in County Fermanagh.

He said his client had a very limited criminal record and no links with the drugs trade or organised crime, saying he found himself facing such serious charges due to “an unfortunate series of events”.

District Judge Eamonn King rejected the bail application, with McDonagh placing his head in his hands as he heard he was to be remanded in custody, with the case to be next heard at Newry Magistrates' Court on 24 June.