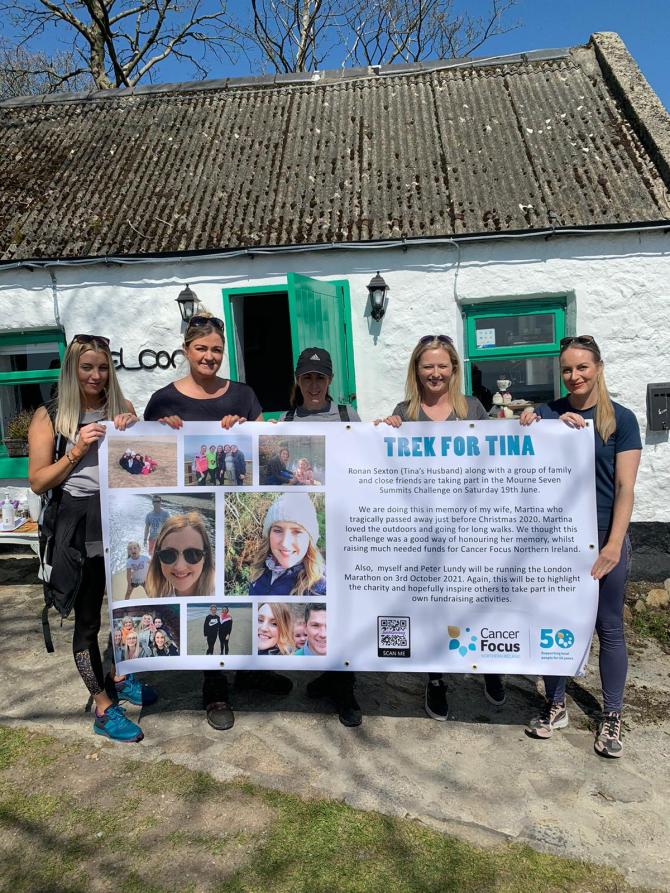 AN ANNALONG cafe has teamed up with a local photographer to raise funds for Cancer Research NI.

During her lifetime, Rachael says Martina impacted the lives of so many people with her kind personality and willingness to help anyone.

The pair were part of the same friendship group since they were 11-years-old.

Rachael adds: “Martina was always so outgoing and had such a zest for life.

“She didn't want to give up and kept going until the very end.”

When Martina passed away of liver cancer in December 2020 at just 39 years old, her family were left devastated.

The local community rallied around her husband Ronan and eight-year-old daughter Charlotte.

When Ronan decided he would organise a fundraiser in memory of Martina, he was immediately met with a wave of support.

He set up a Just Giving page for the 'Trek for Tina' just a few months ago and it has already racked up over £20,000.

Friends and family will participate in the Trek for Tina by joining Ronan on the Mourne Seven Summits Challenge.

Ronan and his friend Peter Lundy will also participate in the London Marathon this October in honour of Martina.

Rachael says: “I think getting out and walking has really helped Ronan with the grieving process.

“It's been great so see so many people showing their support for this cause.”

Rachael and Martina's other friends at the Carrick Cottage Cafe have been doing everything they can to raise awareness of Ronan's fundraiser.

Back in April, the group hiked Slieve Binnian and planted a rose bush in memory of Martina.

The group have done everything they can to keep Martina's memory alive and this has not gone unnoticed by regular customers at the cafe.

Local photographer Noel Hughes is a frequent hiker and often visits the Carrick Cottage Cafe on his treks.

Not only has Mr Hughes helped to design a large poster outside of the cafe, raising awareness of the Trek for Tina, but he has also generously offered to sell some of his photography prints at the cafe and donate a large percentage of his sales to the Trek for Tina fundraiser.

Rachael says: “When Noel heard about Tina's story he was very understanding and wanted to do whatever he could to help as he has also lost a close friend to cancer.

“He has taken some beautiful pictures of the surrounding area and they'll be sold here at the cafe all the way through until October as we continue to raise money for Cancer Research.”

Rachael has said she would love to collaborate with other local creatives if they have any ideas for raising awareness for Cancer Research.

For now, Ronan and the other friends of family continue to raise as much awareness as possible of the Trek for Tina which will take place on Saturday 19 June.

Rachael says: “Tina was always the more outgoing one of the couple and she would be so happy to see Ronan spreading the word about this fundraiser.

“I know she would be so proud of Ronan and her family for all the work they're doing in her memory.