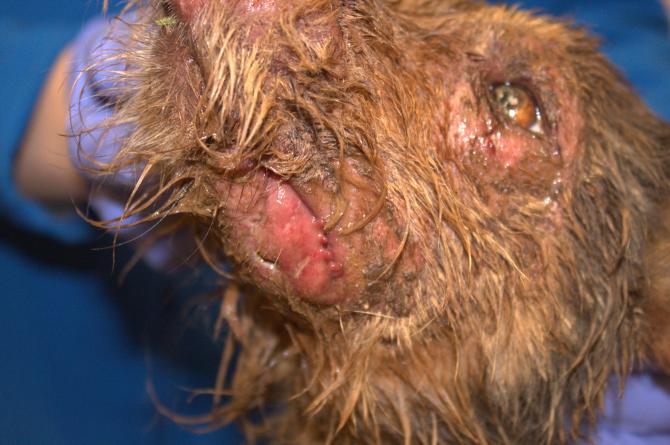 The injuries sustained to the facial area by the Patterdale Terrier during the incident.

A RATHFRILAND man accused of “baiting badgers” has walked free from court after his prison sentence was suspended when his appeal was heard this morning (Thursday).

Paul Michael Reavey, 53, of Lisnaree Road, near Shinn, was convicted of causing unnecessary suffering to a Patterdale Terrier last month.

He had been ordered to serve four months in prison but was immediately granted bail as he sought to appeal the sentence.

On that date, the magistrate, in sentencing Reavey, had described the events which led to his appearance in court as “something from the Middle Ages”.

He said: “This is an appalling practice - something from the Middle Ages which shouldn't be happening but it does when people like you are baiting badgers.”

That appeal was heard this morning at Newry County Court before Judge Gordon Kerr QC.

Reavey's defence handed to the judge a “booklet of references”, with one referring in particular to his family responsibilities.

Judge Kerr stated he believed the previous judge had been “more than entitled to consider prison appropriate” but “it seems to me there are exceptional personal circumstances that will allow me to suspend the sentence”.

As a result, the judge said he would suspend the four month prison sentence for a period of two years, warning him any further offending in that time frame would see him serve the period of four months as well as “a considerable additional sentence”.

He then told Reavey he was free to go.