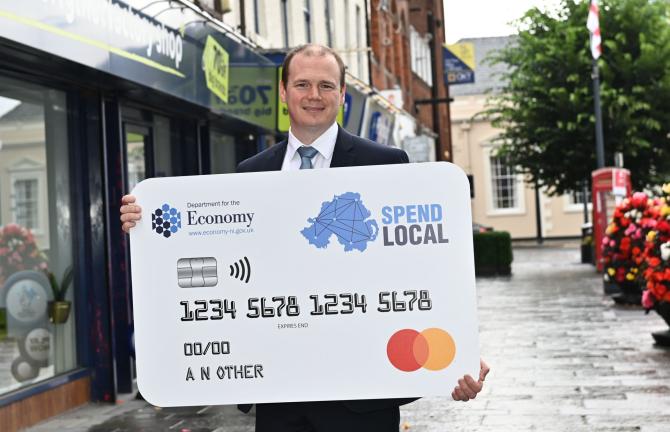 The scheme has been announced by Economy Minister Gordon Lyons.

THE High Street Scheme, which will see every over 18 in Northern Ireland receive £100 to spend locally, is to open for registration in September.

It was announced by Economy Minister Gordon Lyons as he confirmed the contract for the delivery of the High Street Scheme (HSS) has been awarded to Prepaid Financial Services (PFS).

The £145 million scheme will give everyone aged 18 and over in Northern Ireland a pre-paid card worth £100 to spend on their local high street. It is planned that the registration process will open to the public in September.

Minister Lyons also today revealed the ‘Spend Local’ logo which will feature on each of the cards.

The Minister said: “After a robust procurement process, I am pleased to announce the contract for the High Street Scheme has been awarded to PFS.

“This scheme is a key element of my Department’s Economic Recovery Action Plan and will give a very welcome boost to our high streets which were hard hit by the Covid-19 pandemic. This uplift is what our local businesses need and deserve.

“It will mean up to 1.4 million people will have an extra £100 each to spend on our high streets rather than online. This will help bring many more customers back through the doors of local retail, hospitality and other sectors.

“I look forward to seeing the benefits this scheme will bring to the wide range of businesses situated in the heart of towns, villages and cities across Northern Ireland.”