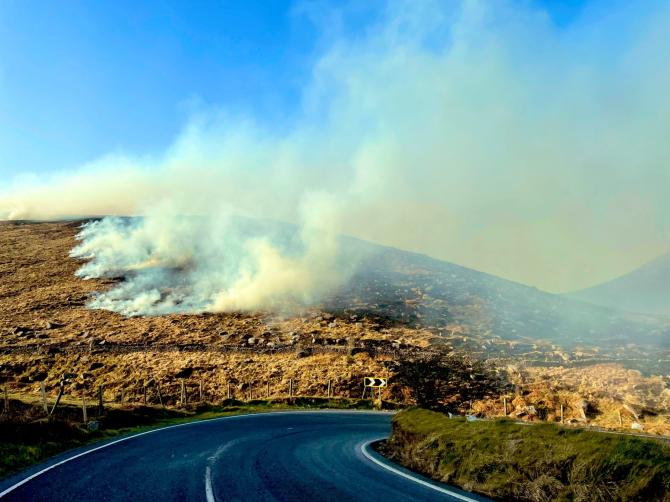 A fire is ongoing on Hen Mountain. Photo: Richard McKee

EIGHT fire appliances continue to battle against a gorse fire in the Mournes.

Firefighters are working hard to extinguish the fire on Cock Mountain and Hen Mountain using beaters and knapsack sprayers.

The incident is ongoing and the public is advised to avoid the area.

And South Down Sinn Féin MLA Sinéad Ennis has praised firefighters for their ongoing efforts in battling huge fires in the Mourne Mountains.

She said: “Firefighters have been battling large fires in the Mournes which started yesterday at Hen Mountain and Spelga Dam.

“I commend the efforts and courage of all those currently working to put these fires out.

“I appeal to drivers and local people not involved in the efforts to put out this fire to avoid the affected areas this morning and allow fire and rescue services the space to extinguish this fire safely.

“Tragically these fires will have caused widespread damage to the environment and our wildlife.

“This is yet another stark reminder that everyone must behave responsibly while visiting the Mournes in order to protect the environment and the safety of the local community.”