A Grand weekend for Shaun at Ulster GP 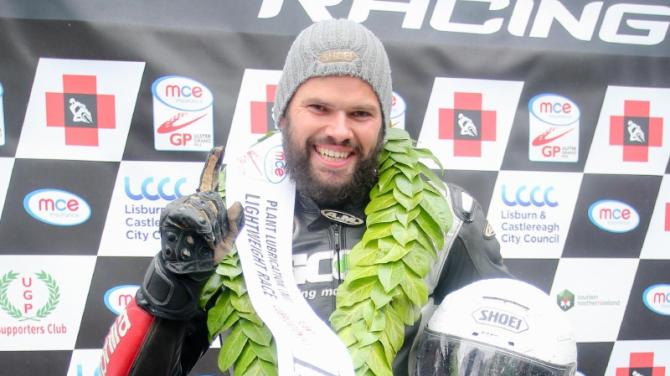 A NAME getting ever more popular in road racing circles, proved to everyone the reason why at the Ulster Grand Prix.

Rathfriland Motorcycle Club’s Shaun Anderson got a last-minute ride on a 250cc machine for the Dundrod circuit, allowing him to compete in the Plant Lubrication NI Lightweight Race.

Shaun was timed 7th on the Kramer for the Supertwin race, a solid standing against the twin machines.

Thursday threw up more changeable conditions. With dry practice, the Lisburn and Castlereagh City Council 600cc Supersport race set off, only to be red flagged on the second lap with heavy rain.

The organisers made the call to bring the Supertwins to the front, and with the track then drying out, it was back to the Supersports.

The final race of the evening would be the Plant Lubrication NI Lightweight and Ultra Lightweight race, in which Shaun would dig in and race to second place on the CB 250cc bike, just 8 seconds behind returning winner, Neil Kernohan.

For his first time at the track in five years, it was a result no-one could be unhappy with.

Shaun however, had different ideas going into Saturday’s race - again in far from ideal conditions.

Unfortunately for him, a stone flying up from the wheel of another competitor pierced the radiator of his L7 Suzuki, putting an end to any chance of success with the big bike.

Then with the MMB Surfacing Superbike race being red flagged as the riders went onto their third lap, the Ulster Grand Prix Club made the choice to run the lightweight machines.

Shaun set off with good pace, and used slipstreaming to his advantage to rocket past opponents, but yet again the race was red flagged, and called a result, with Shaun beating Neil Kernohan, and Darryl Tweed in third.

Shaun went through the speed trap at 138.3mph, almost 6mph slower than Neil Kernohan, highlighting his skill and capability in the more technical parts of the course.