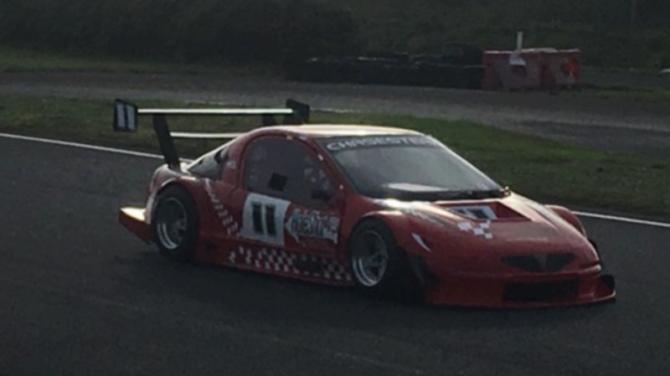 All four Kirkistown-based championships were up for grabs, as well as two stand-alone trophy races.

These were the Emerson Fittipaldi Trophy for Irish Formula Vees and the Martin Donnelly Trophy for FF1600s.

The first race of the day was for the Saloons. Portadown’s James Turkington had an almost unassailable lead going into it, but had drive shaft problems during Friday testing. If he failed to finish and Downpatrick’s Andrew Armstrong could win both saloon races with fastest laps and pole positions, he could snatch the championship.

The plan went wrong for Armstrong with qualifying, as Turkington took pole position. However, Armstrong took the lead in his BMW M3 from lap one and was never headed.

Turkington initially dropped to third in his Seat, behind Belfast’s Stephen Traub in his Honda, before taking the place back on lap two. That was how they finished.

Neil White was fourth. Stephen’s father, Tony Traub was fifth in his Honda Civic and Donal O’Neill, from Nutt’s Corner, was sixth in his Seat Cupra.

Randalstown driver, Paul Sheridan sealed the BMW 330i title with seventh place after a great battle with visiting drivers Ken Byrne, from Carlow, and Aidan Byrne, from Navan, both in Toyota Celicas. Dundonald’s Keith Wray was 10th in his BMW 330i.

Second place was enough to give James Turkington the 2018 Saloons title and he decided to forgo the second race and head to Brands Hatch to watch brother Colin try to seal the BTCC Championship.

This left Armstrong free to take a less challenging win from Stephen Traub. White was third, while, this time, O’Neill claimed fourth, ahead of a five way battle between Traub Snr., Sheridan, the two Byrnes and Wray. Traub Snr., took control on lap seven and finished ahead of Sheridan who was in sixth place. Aidan Byrne got seventh, while Wray got the better of Ken Byrne on this occasion.

The first Fiesta Zetec race was a carry over from the August meeting and only those drivers who were entered in August were allowed to race. Nutt’s Corner’s Eórann O’Neill was starting from the back because of qualifying problems in August.

Newtownards driver, Ricky Hull was on pole and he duly took the lead from the start. Belfast’s Paul Stewart was right behind. Desi McGlade, from Belfast, was the third car in this fast Fiesta freight train and Lurgan’s Malcolm McKeown was right on McGlade’s rear bumper.

On lap seven it all got frantic. Stewart and McKeown both passed Hull. McGlade dropped to fifth behind O’Neill. A lap later, Hull repassed McKeown, who was passed by O’Neill on lap ten. The final result was Stewart, Hull, O’Neill, McKeown, McGlade and Walker, in that order.

The final championship to be settled was the Roadsports and this was to be epic.

The two men who could win were Dromara’s Mike Johnston and Newtownabbey’s Jim Larkham. Their rivalry had been the stuff of legend all season.

Johnston fired the first shots by taking his Tigra to pole position for both races, while Larkham had trouble with his Radical and qualified last!

In the first race Johnston took an early lead but Larkham was charging, rising to second place by lap three. John Benson, from Holywood, was having a great run in his Crosslé 37s and was in third position. On lap eight Larkham fought past Johnston and continued for the win.

Thus, going into the final race, Johnston had 191 points and Larkham had 179. Larkham had to win again with Johnston lower than fifth. It was too tall an order. Even though Larkham fought through for the lead on lap five, Johnston never dropped lower than second before he retook the lead on the final corner on the last lap. Benson had an untroubled run to third place.

This race day ended an excellent season of motor racing at Kirkistown Circuit. The awards for the Kirkistown based championships will be given at an event in Belfast on Saturday, 5 January.