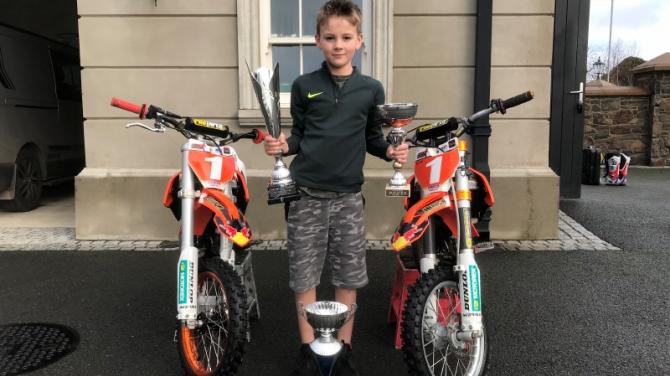 Eight-year-old Alfie Herron shows off his trophies, having reached a top five position in this year’s British Motocross Championship.

AN eight-year-old Leitrim schoolboy is giving fellow competitors a run for their money, having secured a top five position in this year’s British Motocross Championship.

Alfie Herron, a pupil at Drumadonnell Primary School, competed in the British championships for the first time this year.

After six rounds, which took place throughout the UK, he finished fourth overall.

Alfie, the son of Johanna and William Herron, of Herron Trailers only started riding competitively in motorcross last year.

He is picking up some top racing tips from his dad, who was himself a competitive motocross rider.

Alfie, who hails from a family passionate about motorbikes, got his first motorbike at four years old and he also became hooked.

This year the Leitrim boy took part in the Irish and British championships, with rounds spread across Ireland and the UK.

Indeed, he was also the winner of the Irish Championship in the Big Wheel Autos Class.

In his spare time he keeps his fitness levels up by riding his mountain bike round the trails in Castlewellan Park with his dad, and he is also a very keen scooter rider.

Next year Alfie will move up to the 65cc class and aims to compete in the Ulster, Irish and British championships.