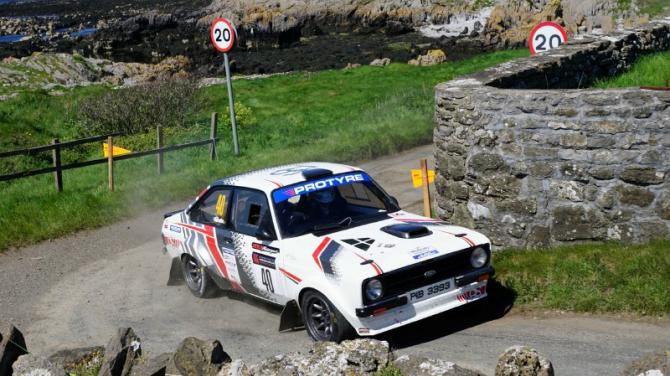 John has competed on the stages there on two previous occasions as a navigator, however in his first role as driver, he took the highly-competitive B11 class honours on both Friday 10 and Saturday, 11 May.

While motorcycling is undoubtedly the most popular motorsport on the Isle of Man, with regular events such as the TT and classic TT drawing thousands of fans each year, the island is also an ideal spot for rallying.

John told The Outlook that his participation in the event was a last-minute thing.

“It was a short notice request. Lawrencetown navigator, Ashley Trimble had asked me would I be his driver in the Manx National Rally in order for him to score points in the Protyre Asphalt Rally Championship.

“Thankfully we went out and got him the maximum points we could,” said John.

John added that he was “familiar” with the roads as he previously competed twice as a navigator on the stages himself and has attended rallies there over the past 40 years.

“I couldn’t enter the Manx National as a National A licence is required, so we were moved to the Chris Kelly Memorial Rally for National B licence holders, which we won outright!”

John started well, setting the 17th overall fastest time for the combined events on the opening Druidale stage and ended Friday night in 16th and leading the National B rally. His consistent stage times continued on Saturday. He was as high as 14th overall after the penultimate stage, and finished with a time good enough for 15th and first in class in the National A event.

It means that he has now has jumped up to second in the B11 drivers’ standings in the Protyre Championship and the win also means that Ashley Trimble is third overall in the co-drivers’ points table.

“It was typical Isle of Man climate, one stage there was a big shower of rain and the next was dry,” said John.

John said that the weather also “was another challenge that was thrown into the mix”.

“The result exceeded our expectations considering it was the first time to compete together and my first time to drive on the island. I never expected to win the Chris Kelly Memorial Rally,” said John.

“I have to say a big thanks to Ashley who was brilliant on the notes, Tommy McKee, Rodney White, Andrew McCormick, Paula Hanna, Steven and Judith Armstrong who were a big help to us over the weekend. Well done to Manx Auto Sport for an excellent event. The Isle of Man stages are world class and are a must, at least once!”

He is now hoping for success in the Down Rally later this year, which is also a round of The Protyre Asphalt Championship. The rally is run jointly by Rathfriland and Ballynahinch Motor Clubs with the service area at the Eikon Centre, Sprucefield.