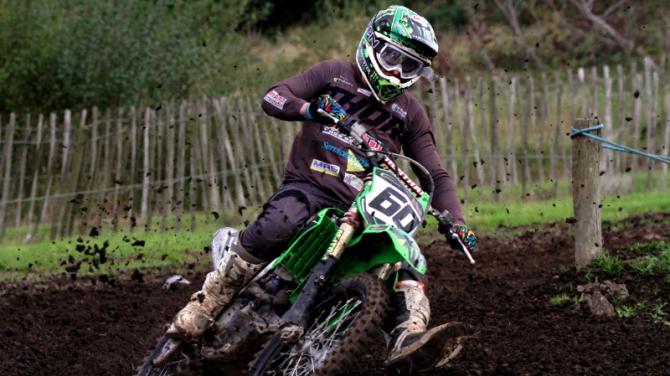 LOUGHBRICKLAND rider John Meara rounded off a superb 2019 season by clinching the Ulster MX1 Moto Cross Championship at Saturday’s final round held at a wet Dessertmartin course in County Londonderry.

John adds the Ulster title to the Irish one which he wrapped up back in August.

It proved not to be a straightforward run to the title for John.

He said, “The day started off great with going fastest in superpole and also winning the first race. Race two started great with a holeshot, but then found myself on the ground at the second turn.

“I remounted at the very back and fought my way back to second. Race three started great with another holeshot, but feeling uncomfortable with the track conditions I found myself being pushed back to second by lap four.

“Not wanting to settle for second I tagged onto the back of the leader and was just starting to pressure him when I got a puncture and had to retire.”

At the end of a tough 2019 season which has seen the Loughbrickland plumber race all over Ireland and a few meetings in England, he summed up the year.

The two titles won this year by John Meara continue a remarkable success rate in the tough sport of Moto Cross. John has won a title every year since he began in the sport as a young schoolboy. So what plans does he have for the 2020 season?

“Next year the plan is to mainly ride in England competing in the Maxxis British MX1 Championship and the Pro MX National Championship,” he said.

“I will also be doing some races at home. I would like to say a massive thank you to everyone who helped keep the wheels turning this year and I’m really looking forward to 2020.”

This weekend the Hillsborough Club promote the last meeting of the short circuit season with their Sunflower Trophy event at Bishopscourt. This is the 42nd running of the prestigious Sunflower Trophy race which has attracted entries from top British Superbike riders Christian Iddon (Tyco BMW) and Buildbase Suzuki’s Richard Cooper. On his debut last October Cooper dominated the superbike races and won the Sunflower Trophy.

Practice takes place on Friday morning and there is a five race programme in the afternoon. On Saturday there will be thirteen races with many local riders having their last outings of the season.