Mazda turn on the style with MX-30 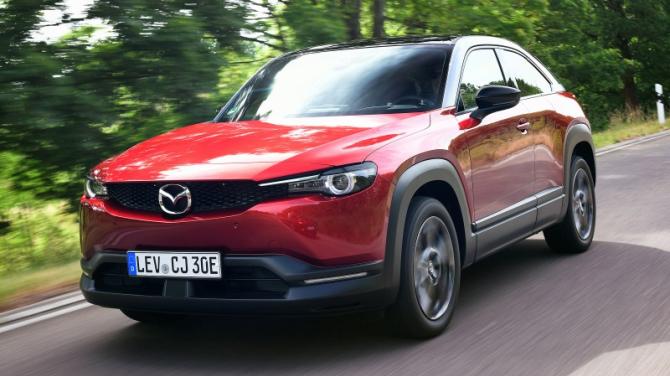 The Mazda MX-30 is a stylish electric vehicle with a great price tag, if you can deal with its very modest range.

However, the car’s appeal doesn’t lie in how far it can go on a single charge. Instead buyers will be swayed by the Mazda’s high-quality feel for reasonable money. It’s good to drive too, thanks to its relatively light kerbweight when compared with rival electric vehicles.

Mazda isn’t the first car maker you’d think of when talking electric cars. While rivals fall over themselves to promote their all-electric developments, the fiercely independent Japanese marque’s main priority remains the perfection of the petrol engine. owever, it’s still found time to entertain the electric-car lobby with this, the MX-30.

The newcomer is a compact all-electric SUV that you can think of as a rival for the Tesla Model Y and Volkswagen ID.4. However, it has been created with a radically different theory to those vehicles.

Mazda's first all-electric production vehicle, the MX-30, is predictably a Crossover. It's been conceived and created with the brand's well-renowned focus on distinctive styling, innovative technology, driver focused dynamics and class-leading interior quality.

Mazda has chosen to give this car a relatively small 35.5 kWh battery (the same size as the one in the tiny Honda e), so you shouldn't be expecting the kind of driving range you'd get in established EV compact models like the Renault ZOE. It's just 124 miles. Still, for the urban-based folk Mazda thinks will be most attracted by this model, that may not be too much of an issue. You'll be able to eke it out easily though because instead of all the power (140hp) arriving all-at-once (as it does in most rival EVs at this price point), Mazda has engineered the torque delivery to be more linear, which makes the car easier to adjust to for those from a combustion background.

The Japanese maker provides steering wheel paddles to enable driver adjustment of the brake regeneration rate - everything from very light retardation when you release the throttle to so much retardation that the car virtually stops on its own every time you come off the accelerator. The car also offers an artificial sound to indicate either acceleration or deceleration. Handling should be taut, thanks to a very rigid body structure, made possible by a bracing ring placed around the low-placed Panasonic battery pack. And to Electric G-Vectoring Control Plus (e-GVC Plus), which enhances chassis performance by using motor torque to optimise the front-rear load shift for improved stability.

The quoted 124 mile driving range puts this Mazda at a disadvantage to quite a few of its similarly-priced rivals, cars like the Kia e-Niro, the Hyundai Kona Electric and the Renault ZOE.

All of those models can go further on a single charge - but cost significantly more to buy. Customers ordering an MX-30 'First Edition' will qualify for a free wall box home charger, while the car is equipped with both a Type 2 mode 2 charge cable for 3-pin plug charging and a Type 2 mode 3 charge cable for AC charging via home or public charge points. Additionally, the DC socket allows for rapid charging up to 50Kw. In this charge mode a charging time of 30 to 40 minutes can deliver up to 80 per cent battery charge.

We should also mention the warranty, the usual unremarkable three year / 60,000 mile package. If you want to extend that, you can do so via optional 'Essential', 'Elite' and 'Complete' plans. Included in the standard package is a three year paintwork warranty and 12 years of anti-perforation cover. In addition, there's a 'Mazda Accident Aftercare' scheme which sees the company liaise with your insurer after an accident, making sure that you have access to a courtesy car if you need one and ensuring that all repairs are carried out to full Mazda standards.