No rash but my baby still had meningitis 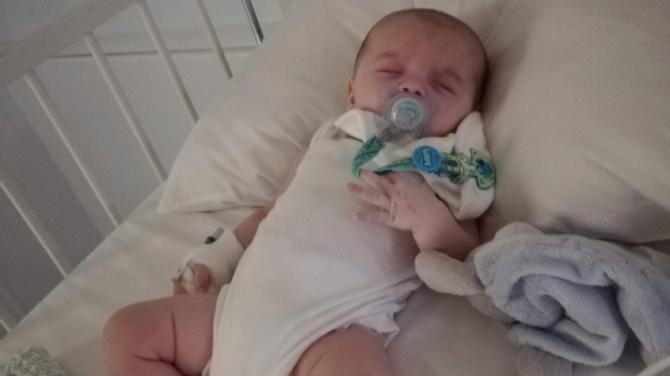 A DROMARA mother whose baby contracted meningitis has urged other parents to act on their instinct.

Judith is so glad to have her baby home from hospital.

Baby James was running a temperature and vomiting but thanks to the quick-thinking of his parents, he was rushed to the Royal Victoria Hospital where he received urgent, life-preserving care.

Judith, a mum of three, first become concerned when baby James started crying “out of the blue” on his brother’s birthday on 13 August.

“James was crying a lot. He would usually have an unsettled time at night although this was at 3pm which seemed a lot earlier than usual.

“However, I thought it had just started earlier that day. Apart from the crying there was nothing else that seemed physically wrong with him.”

Two hours later, Judith left James with his grandmother while she went to pick up school trousers for her other son.

“When I returned, his nana said she couldn’t get his bottle into him and there were tears in his eyes, he had been crying that much.

“Normally when he would cry at night he wouldn’t have any tears, but he was clearly very upset and has always been a good feeder,” she said.

Judith managed to calm James down and he slept for a while after returning home.

She said: “When he woke, my husband, Mark managed to give him his bottle. But when he finished, he brought the whole thing up again and vomited everywhere.

“Again, bringing up milk isn’t unusual for him but then he brought up a lot more and then more again. It was then that I started to get worried as I realised it was more than just bringing up too much milk.”

“He didn’t feel warm or anything to me but when we checked his temperature it was up to 38.4 degrees and then I phoned the out-of-hours doctor.

“Meningitis was the last thing on my mind and when the out-of-hours doctor heard about the temperature he told me to take him over to A&E since he was so little,” she said.

When Judith arrived at the Royal Victoria Hospital, James’ temperature had returned to normal.

She continued: “Staff said they would monitor him for the next couple of hours and we had lots of different doctors coming in and out of the room.

“Within that time his temperature shot back up to 38.7 degrees and when it went back up again I could almost see the change in the staff. They became worried and then a paediatrician was brought in.”

The paediatrician decided to carry out a lumbar puncture on James to check for meningitis.

This is a common procedure used to test the fluid around the brain and spinal cord.

Judith said: “The doctor wasn’t able to do the lumbar puncture after two attempts and it was then carried out the following afternoon.

“However, we were admitted to the ward and the doctor explained to us that they would be starting antibiotics straight away because meningitis was suspected.”

James was diagnosed with viral meningitis 48 hours later after the results of his lumbar puncture.

Meningitis is the swelling of the meninges, the lining around the brain and spinal cord, and is caused mainly by germs entering the body.

And although there are many different causes of meningitis and septicaemia, different germs such as bacteria, viruses and fungi can cause the swelling if they invade the body.

Judith said: “Antibiotics don’t help viral meningitis, only bacterial meningitis and although the results of the lumbar puncture took 48 hours to find out what strain of meningitis it was, they wanted to start the antibiotics as a precautionary measure.

“It was all a bit of a rollercoaster and when the results came back to say James had viral meningitis they said because they had already started him on antibiotics they wanted to give him the full seven days of the antibiotics in case there was a trace of the bacterial meningitis.”

James spent a week in hospital and has since made a full recovery from falling seriously ill.

However, Judith says if it wasn’t for her husband’s suggestion to take James’ temperature – things could have been a lot worse.

“When I think of meningitis I think of a rash and James was just a wee bit pale. All he had was the high temperature and vomiting. Not the usual signs that I would have in my head.

“The doctor said that the levels were 20 in the fluid taken from his lumbar puncture and in some children that level can be as high as 200.

“We were told that because we were on the ball and got him in so early they were able to treat the strain of meningitis well.”

Judith says the only reason she called out-of-hours was because of James’ high temperature.

She said: “If we hadn’t had taken his temperature then we would have just assumed his symptoms were colic and reflux.

“I would make other parents aware that if their baby seems out of sorts and not their usual self don’t ignore it and take their temperature straight away.

“I am just so glad that we did and ironically a doctor had told me not that long before James took unwell that they would not advise you to give a tiny baby Calpol.

“The doctor said it can mask something else by reducing the temperature and thankfully I was just so glad that all that information had stayed with me and I hadn’t done that.”

If you have a question about meningitis or meningococcal septicaemia, you can contact Meningitis Now for more information from specialist support staff on 0808 80 10 388 (9am-5pm Monday-Friday).