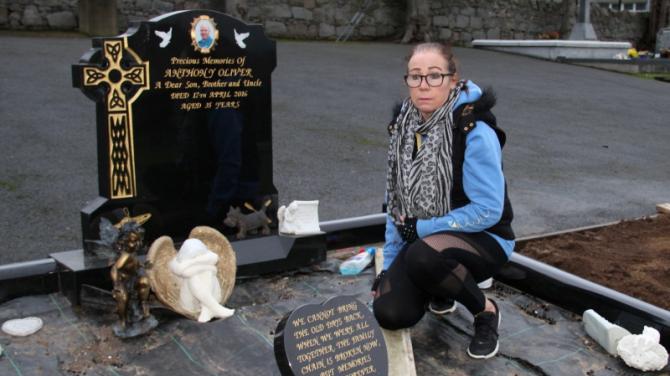 THE final resting place of a Rathfriland man has been targeted in a shocking theft.

He was laid to rest in St Mary’s graveyard with his family marking the plot with a granite headstone and surround covered with black polished marble stones.

These ornate stones cost £400, however, they were stripped from the grave and ornaments disturbed last week leading police to probe the theft.

“I just hope that the thieves have some kind of a conscience to think about what they are putting my family through.

“I have no money, I am still paying a loan back for the grave and for something to steal what has been created as a beautiful tribute to Anthony is just heart-breaking.

“We are already going through heartbreak and this time of year is hard enough without the upset of this, it’s soul-destroying, it really is.”

Theresa’s niece first spotted the stones missing and some stone tributes broken and alerted the family.

From piecing together information from people who visited the graveyard over the weekend, it appears the marble stones could have been stolen over two visits.

“It was noticed that the level of the stones was down then the next time the stones were gone.”

Police believe the theft from St Mary’s Church off Newry Street could have happened some time between 12pm on Sunday, 11 November and 4pm on Tuesday, 13 November.

His mum says Anthony “didn’t have an enemy in the world” and can only surmise that the crime was financially motivated.

“Maybe they’re looking money for Christmas and went after the valuable stone. I picked the dearest stone for my son’s grave, I just wanted the best for him.

“For this to happen, it just feels like his grave has been deconsecrated. It’s just opened all our wounds all over again.

“It’s been so hard losing Anthony but this really is just the worst. To steal from someone’s grave is really low.

“Nothing like this has ever happened in Rathfriland, that I know of, it’s awful.

Grandmother of five, Theresa says there are now suggestions that there should be CCTV covering the chapel and graveyard area.

Meanwhile, Theresa would dearly love the grave reinstated before Christmas and has been touched by the kindness of others.

“People have just been so good. Two people have offered to help replace the stones. I don’t think they will be the same valuable stones, I’d be too afraid of this happening again, and we’re looking at some sort of glue to hold the stones in place.

“Everyone has just been so nice and supportive to us even people we don’t know and people Anthony kayaked with have been in touch. People seem to really feel our pain that Anthony’s memory has been tainted like this.”

Anthony passed away suddenly on 17 April 2016 after development ‘flu-like symptoms. The medical opinion is that Anthony died from suspected pneumonia although his mother believes it may have been a circulation issue or perhaps a clot from a car crash some years earlier.

Anthony, a grandson of Seamus and Carol Devlin from Rathfriland, worked as a builder and his work regularly brought him to England and Dublin.

The family lived in Banbridge and Rathfriland over the years with Anthony spending eight years in Germany and York before deciding to settle in Rathfriland two years before his death.

While living in Banbridge, he developed a passion for watersports, joining the town’s kayaking club.

“For this to happen, it’s just so painful and hard to understand.”