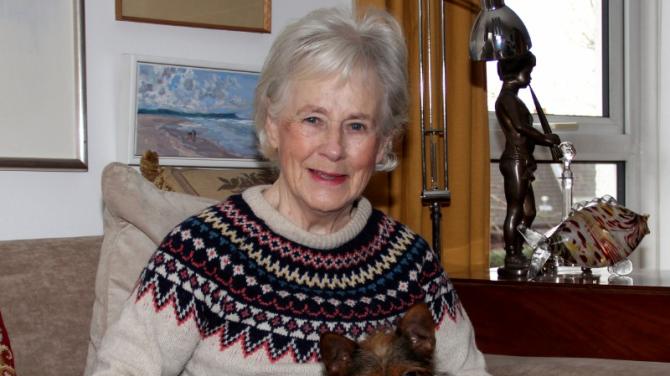 BANBRIDGE-BASED author Doreen McBride has captured the heart of County Down in her new book.

The author and storyteller, who describes herself as “a biology teacher who has gone wrong,” taught in Dromore High School before taking early retirement in the 1990s.

Following retirement, Doreen has focused on her writing and her latest book entitled ‘The Little Book of County Down’ is her fifth publication with The History Press.

Doreen is also the author of many more books on folklore, folktales and local history and has a passion for keeping Northern Ireland’s past and heritage alive.

She is a member of the Society of Authors, the Ulster Historical Foundation and the Federation of Ulster Local Studies as well as Banbridge Historical Society.

Married to George, who was the former headmaster of Gilford Primary School, Doreen is mum to two grown-up children and has four grandchildren and two great-grandchildren.

Doreen’s latest book is out this month and is a compendium of fascinating, obscure, strange and entertaining facts about the ancient county of Down.

Within its pages Doreen says readers are treated to finding out about County Down’s history, its literary heritage, its churches and castles, its festivals and fairs, and its famous (and occasionally infamous) men and women.

It is also a reliable reference book and a quirky guide and can be dipped into time and time again to reveal something new about the people, the heritage and the secrets of Down.

Speaking to The Outlook about her latest book, Doreen says she felt the urge to pen a novel about her favourite county, having previously written one about County Fermanagh.

She said: “I have always been fascinated by folktales and folk history and this new book focuses on the whole of County Down and all of the places you can visit and a bit of the history behind it too.

“I write about some of the folktales behind County Down too, we have some local legends here and Rathfriland gets a good mention as well.

“It took me nine months to write the book and as part of my research I went out and asked people lots of questions. I found people to be very helpful, but people here are always very nice.”

Doreen also travelled across County Down as part of her intensive research process.

“I learnt so much about County Down, especially enjoyed finding out about my home town, Banbridge. Strangford was just beautiful too.

“This is my fifth book for The History Press but this would be around the 35th book I have written in total. My best seller is ‘Speaking Norn Iron as She Should be Spoke’,” she said.

Storytelling has also taken Doreen across the world to Canada, America and New Zealand, as well as the British Isles.

She also spent some time as storyteller in residence at the University of South Carolina and was previously credited by the Arts Council for her storytelling while doing it full-time.

The former teacher was also granted a year-long secondment while teaching to write the children’s guide for the Ulster Folk and Transport Museum.

She added: “Although I am no longer a full-time storyteller, I still do it from time to time. I now like to do it locally if I am asked once or twice a month.

“I have a book coming out in the late spring about folktales from Northern Ireland for children, I thoroughly enjoyed writing it.

“I went to Edenderry Primary School in Banbridge and read some of the book to the pupils from P3 to P7.

“They found it very funny and that book is currently going through the editorial process at the minute.

“I have always written and I have done so since I was a child. I like writing the most about stories and people.”

Doreen is currently working on a book about Banbridge ‘Star of the County Down’.

Doreen’s latest book ‘The Little Book of County Down’ is available this month from local outlets and Amazon.

Swann in new 'stay home' if you have Covid symptoms plea