Scania get a warm trucker welcome to Dromara 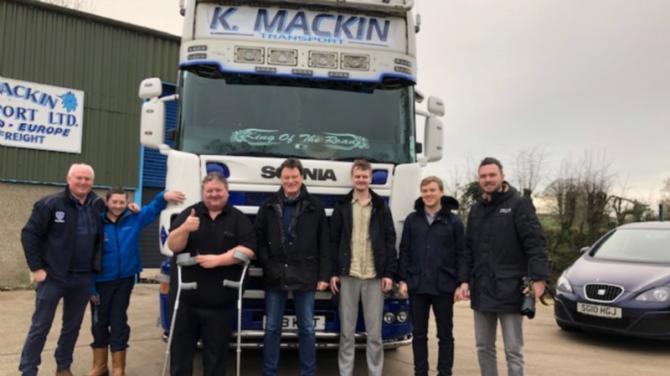 Carol Mackin, managing director of K Mackin Transport Limited based in Killaney Lane, has spoken of her and her husband’s pride after the Scania Group in Sweden contacted them about his extensive fleet of Scania trucks.

Scania’s head office has been situated in Sodertalje since 1912 and still has huge production facilities in Sweden.

Filming took place last Wednesday (9 January) in Banbridge, Corbet and Dromara and will soon be broadcast on the Scania channel worldwide.

Speaking to The Outlook, Carol said: “It all started with Scania in Sweden hearing about a Scania song that had been written by Joe Moore, the country singer, and Eddie Crozier.

“They had originally contacted Eddie with an idea of doing a DVD for the song for their television channel.

“They had known about Kevin’s show fleet as we do attend quite a lot of truck shows around Europe and Eddie put them in contact with us.

“They rang and asked if they could come over and film our lorries in various locations locally.”

Carol said it was “a huge privilege” to be contacted by Scania who flew over a crew for the filming process.

She added: “It all happened very quickly. Three of the guys were directly from Scania and then there was a cameraman.

“They spent most of the day in our transport yard filming the lorries and they wanted to go to different scenic locations so we took them to the Corbet Lough and the Dromara Hills.

“It was a brilliant experience, we had great craic and they were really lovely guys.”

Eddie Crozier, one of the song writers, also came over for the filming process.

Carol continued: “On Thursday morning they were flying over to Scotland to film Joe Moore as he was over there on tour.

“They really were blown away by Kevin’s collection which includes seven show trucks and a fleet of 26 working lorries and they got a guided tour of our V8 room.”

The Swedish Scania crew were also treated to an impressive convoy of lorries in Dromara and food and entertainment in O’Reillys bar in the village.

“Marty McKay who owns O’Reillys is a very good friend of ours and the food there is second to none.

“We asked Marty if he could provide the food so we could bring the guys to experience a real Irish bar. Then Marty asked a few local truckers to come down as well.

“They parked in Marty’s yard, had a bite to eat and a bit of craic, then created a convoy through Dromara.”

“We also had a bit of a singsong. Obviously we all sang the Scania song and they joked that we had created the ‘Scania Truckers’ Choir’. I think we should leave the singing of the song to Joe Moore,” added Carol.

The Ballela couple would like to thank Eddie Crozier, Joe Moore, Marty McKay, the staff in O’Reillys, Barry O’Hare and all the truckers who came down to join in the fun.