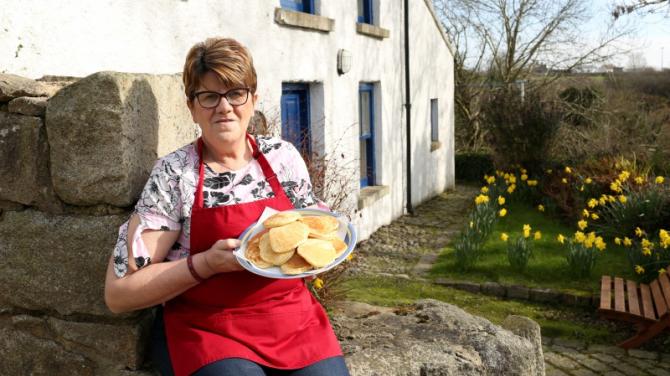 TODAY (Tuesday) is Shrove Tuesday, also known as Pancake Day which is the perfect excuse to eat them by the baker’s dozen!

The Outlook visited Hanna’s Close on the Aughnahoory Road, Kilkeel to discover a tried-and-tested recipe passed down through generations.

Ruth Hanna, one of the cooks in Tilly’s Tea Room in Tommy’s Cottage at Hanna’s Close, treated us to a traditional pancake-making lesson.

Hanna’s Close cottages are nestled in the Mournes and the 10 listed buildings date back to the 1600s and have carefully been restored for accommodation.

Ruth, who met us in George’s Cottage, is married to Robert Hanna and has four children and one grandchild.

The Mourne woman, who hails from the Silent Valley and comes from a family of 13, says she has been cooking from she was “knee high” and learnt all her skills from her grandmother and mother.

She has been making pancakes and scones from she was aged six and still cooks on a 200-year-old griddle handed down from her great-grandmother.

“I don’t like to make my pancakes very sweet. I never weigh them either, that was the way I was taught to make them.

“I remember my grandmother used to make the pancakes over an open fire and the griddle is attached to a crook and crane to do so.

“When we were children we would have made one big pancake the size of the griddle and it was flipped over.

“Then when it came off the griddle we would have put syrup on it and rolled it up into one big long pancake and cut it up then so it was like a swiss roll. It was lovely,” she said.

Ruth makes the pancakes on the griddle over an open fire

The Mourne woman uses the same recipe each time she makes pancakes and admits her six-year-old grandson is the biggest fan of her baking!

Ruth added: “My recipe makes a couple dozen pancakes, depending on what size you make them.

“You need three eggs, two-and-a-half ounces of caster sugar, or you can also use granulated sugar too.

“Then you need 1lb of self-raising soda bread flour or you can use plain flour. However, if you choose to use plain flour you need to add a teaspoon of baking powder and a teaspoon-and-a-half of bicarbonate powder too. You also need a pint of buttermilk.”

To start, Ruth says to whisk your eggs and sugar together, slowly adding in the buttermilk and then the flour and keep stirring so you don’t have any lumps.

She says if you can use a spoon to make the figure of eight with your mix, then you have the perfect batter.

The batter can be kept overnight to make pancakes the next day and Ruth says it will keep in the fridge for three days.

Ruth added: “Make sure your batter is nice and smooth and you don’t have any lumps of flour in your mix.

“You can also change your mix about if you wish and add blueberries, chocolate chips or raspberries.

“Butter the pan before you add your mix and wait until the bubbles start appearing on your pancakes then they can be turned over in the pan.

“Sometimes they accidentally touch each other. And that’s okay too. They don’t have to be round either, you can make them into any shape.”

Ruth prefers to cook at home with her grandmother’s griddle, rather than use a frying pan.

She added: “Once or twice a week at home I would make pancakes or drop scones on the griddle, I think you can control the heat better.

“When at home I would use my soup ladle to put the mix onto it. I enjoy making potato, soda and wheaten bread on the griddle and drop scones and milk farls too.”

Tilly’s Tearoom, which offers the experience of an ‘old time’ setting, is opening to the public on 15 March.