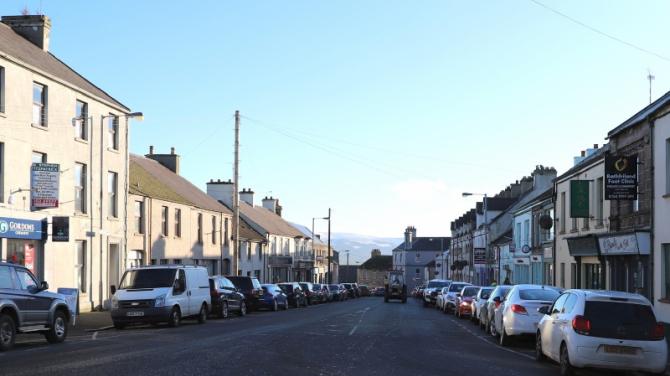 Parking restrictions are set to come into force along the right hand side of Downpatrick Street in Rathfriland. A total of seven spaces will be ‘limited waiting’.

The news that waiting restrictions are set to come into force along one side of Downpatrick Street in Rathfriland has been cautiously welcomed by businesses and residents alike.

In total seven individual ‘limited waiting’ bays are set to be installed along the side of the street that runs from Main Street to Caddells Lane.

The Department for Infrastructure (DfI) said that while there is “currently room in the existing ‘unlimited waiting’ layby for approximately 17 vehicles”, not all of the street will be used as the parking restrictions proposal will “exclude residential properties”.

It comes after one business owner had aired their views that the “thoughtless parking” by traders and their employees was driving away customers, as they parked along the side of the street rather than avail of the town’s free car parks.

The business owner said he would have preferred restrictions along the whole street.

“I suppose it is a step in the right direction. I would have liked to have seen the whole street having restrictions and residents getting a parking pass, similar to what a blue badge does, but that is not something the Department would even consider.

“I am very sympathetic to the home owners as I would not want someone parking outside of my home if I could not.

“I do fear however, that this will squeeze more cars down to the bottom of the street. It still means that people can park there all day long,” they said.

It is understood that the restrictions will extend as far as the building which houses the dry cleaners.

The business owner said it is all down to the attitude of people in Rathfriland.

“The shop owners and their employees need to take the hint now and park in the free car parks. We are lucky in the town that they are still free to park in. Sadly at the minute the attitude in Rathfriland is not very sympathetic to customers,” they said.

However one local resident said he is glad the Department has “seen sense”.

“This is the sensible thing to do so that businesses get the trade, but that no-one’s home is devalued in price if their parking space is taken away,” he said.

A Department spokesperson confirmed to The Outlook that they had undertaken two consultations in the past few months.

“A revised consultation was carried out on an amended proposal to exclude residential properties. This followed some objections to the initial proposal for parking restrictions on Downpatrick Street, Rathfriland.

“The consultation on the revised proposal closed at the end of April 2019 and no objections were received.

“The Department can now proceed to make the necessary legislation in the coming months,” said a Department spokesperson.

“Within this space the Department proposes to formalise approximately seven individual ‘limited waiting’ bays, exact dimensions to be determined on site,” they said.

The Department previously said it was proposing a maximum stay of two hours, with no return within one hour, Monday to Saturday between the hours of 8.30am and 6.15pm on the side of Downpatrick Street that meets with Caddells Lane to the junction of Main Street.

It now means that a total of six streets in Rathfriland will be subject to parking regulations when Downpatrick Street comes into force.

Currently in Rathfriland the north side of Main Street, south side of Caddells Lane and the northern area of the Square (between the Market House and Main Street) are subject to similar parking restrictions as to what are proposed for Downpatrick Street.

There is also a length of no waiting at any time along the north side of Caddells Lane. The two sides of Church Square are also subject to parking restrictions of one hour.