A magic find of the mushroom kind! 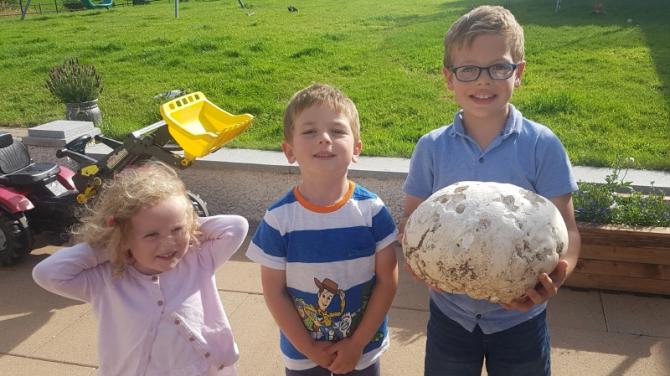 A GIANT mushroom nearly ended up on the dinner plate for one Dromara family after a recent discovery.

Dairy farmer, Cecil Wilson plucked an enormous mushroom from his field on the Carnpark Road after he nearly mistook it for a football.

The mushroom, which is understood to originate from the ‘giant puffball’ species measured an impressive 34 inches in diameter.

This variety of mushroom is safe to forage in the UK and has a soft clean white skin and firm flesh when cut and is a common fungi species.

Although completely edible, Cecil’s daughter-in-law, Julie said she didn’t fancy serving it up for her husband Gordon and three children, Lydia (3) Adam (5) and James (7).

She said: “Cecil spotted the mushroom sitting beside one of the gates in the field when he was moving cattle over.

“He first of all spotted this huge white thing and on further inspection realised it was a mushroom and he couldn’t believe it!

“Cecil brought it down for the three kids to see, although the birds had got it first and there were a few holes in it by then.

“However, he jokingly asked me if I had anything on for dinner and said I could make some mushroom soup!”

Julie says her three children were “absolutely mesmerised” by the mushroom which is now sitting in the family shed.

“The kids first of all thought it was a football and it did have some weight to it and when my youngest held it, it was the fill of her arms.

“We think it may have been growing for some time over the summer in the moist and humid conditions which is ideal growing weather for mushrooms.

“Although it is sitting in the shed now, we will probably throw it back into the field for wildlife to eat away at,” Julie added.