Neil has some bottle! 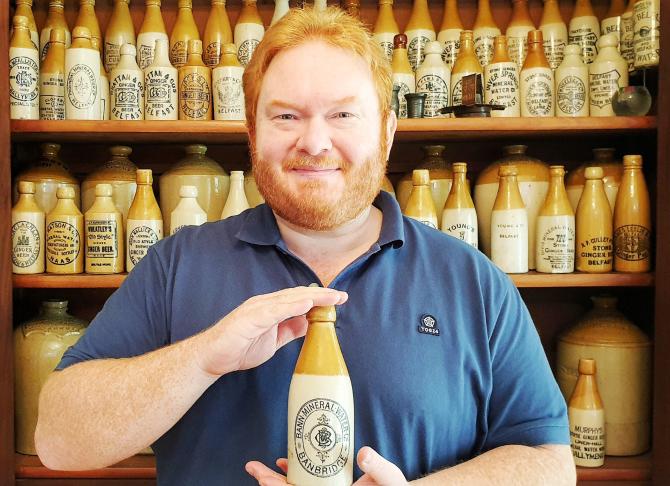 Banbridge bottle collector, Neil Reid is asking for people to keep their eyes peeled for notable local antiques that he can add to his collection

IF Carlsberg did beer bottle collections, Neil Reid’s would probably be the best in the world.

Give a second thought the next time your de-cluttering your garage or taking those dusty boxes down from the roof-space.

Banbridge man, Neil Reid is on the hunt for more than your average beer bottle.

The self-confessed lover of everything antique is asking for people to get in touch if they know of the whereabouts of a stoneware bottle from the Crystal Mineral Water Company, Banbridge.

This would be the “absolute pinnacle” to his collection, however he is open to “any and all items”.

Neil’s curiosity and fascination for beer bottles started when a late friend of his, Helen McFadden who ran The Wellington House in Dromore, jokingly gave him an old stoneware bottle with ‘ginger beer’ marked on it.

Neil said that what was intended as a joke sparked the beginning of his serious hobby.

And so, he began scouring flea markets, car-boot sales and asking people for their help in locating the bottles.

Not only does Neil collect stoneware bottles, he has clocks, postcards, water pumps and everything in-between.

Speaking to The Outlook about his near-350 bottle collection, Neil said: “I keep the bottles in three large display units in my house and have to keep them tidy.

“Twenty to 30 years down the line it would be nice to do something with them and hopefully have them ending up on public display.

“All of the things I collect are social history pieces that have been hidden from public view.

“I have been in touch with Armagh, Banbridge and Craigavon Borough Council about organising an event at the end of this year to display the items and I am hoping to hold it in the Old Town Hall.

“You just never know what you are going to come across,” he said.

“I get calls from people saying ‘look I’ve got this bottle or this antique piece of furniture’ and I arrange to meet up and go look at the piece.

“It’s actually a great way of meeting people and I can say I’ve been lucky enough to meet some very interesting people along the way.”

Neil who works across the border, said his original intention was to collect a bottle from every county in Ireland, but he soon found out there are more bottles out there than he’d ever imagined.

His collection ranges from pieces spanning the length and breadth of Ireland.

And there are so many more that Neil is keen on locating.

He added: “I am aware of bottles from Lurgan, Portadown and Banbridge but have been unable to find the particular ones I’m looking for.

“I’ve never seen a bottle from Rathfriland, so if anyone has one, hiding in their shed please do get in touch.”

Neil is also eager to find anything relating to the Dunbar McMaster spinning mill in Gilford, as his family were historically mill workers there.

He was born into one of the mill worker’s houses owned by the Dunbar McMaster company.

“There is a lot of history surrounding Banbridge and wider area, the River Bann and the Linen Mills and most of it people aren’t even aware of.”

His favourite find to date has been a Stoneware bottle from the Bann Mineral Water Company, Banbridge.

Neil said: “There were only two mineral water companies that operated in Banbridge (Bann and Crystal). Now that I have the Bann, I am seeking a stoneware bottle from the Crystal Mineral Water Company, this is the one that has been eluding me for many years.

“I am also interested in any stoneware flagons or hot water bottles from Banbridge, these were produced by local hardware stores or whiskey suppliers to sell their own products in and provide some much-needed advertising to the general public.”

Neil who is married to his wife, Kate from Dublin said Kate has “developed an interest in bottle collecting”.

“It gives us the opportunity to get out on day trips meeting people to have a look at items.

“Part of the challenge is reaching people who aren’t online, it’s all too easy when you can send a quick email or contact someone on social media but when the person doesn’t communicate through those means, then it’s definitely fun trying to get hold of them. It adds to the excitement.”

If anyone has any items they think might interest Neil they can contact him on 00353866006622 or email neilreid76@gmail.com