Lackan Bog study will reveal how landscape has changed 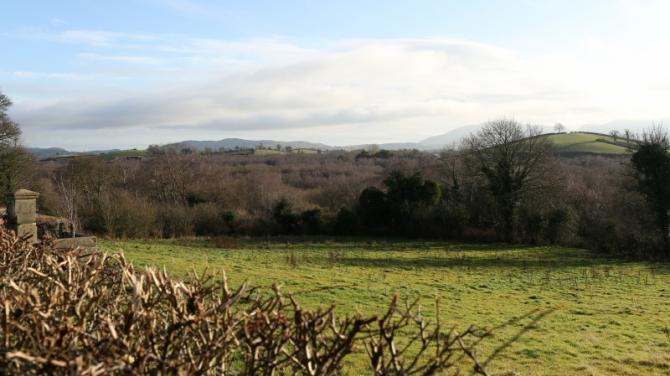 The Lackan Bog near Rathfriland is currently being studied by a team from Queen's University, Belfast

A STUDY is currently underway at Lackan Bog, outside Rathfriland to discover its environmental history and the impact climate change has had on local people throughout the last few hundred years.

The research is being conducted by Rathfriland woman, Gill Plunkett and undergraduate student Adam Purvis, from Fermanagh.

Gill, who is originally from Drogheda, has been studying bogs throughout Northern Ireland and is a lecturer in Archaeology and Palaeoecology in the School of Natural and Built Environment at Queen’s University Belfast.

Gill and Adam have taken samples of the peat and extracted fossilised pollen which will indicate the type of vegetation of the area and how this changed through time.

Through their research they will be able to obtain information such as when the surrounding drylands were cleared for farming and when the bog was first drained for peat-cutting.

Gill examines some of the samples which they took during the site visit at Lackan Bog, outside Rathfriland

Gill who lives close to Knock Iveagh explained her reasoning for this particular study: “I really love the Lackan area and I thought it would be interesting to tell people what has went on here.

“Normally when I am completing this type of sample I look at things such as the environmental climate changes which impact on people and how people respond to these.

“For this particular study, we are interested in looking at the last few hundred years and how the increase in population changed the landscape.

“We can learn so much about an area from peat samples,” Gill said.

Both Gill and Adam obtained permission from the landowner and the Department of Agriculture, Environment and Rural Affairs to commence their research.

Gill said that only a remnant of the original bog is actually left now as most of it was cut away probably in the last 150 years.

The pair started to extract parts of the bog a fortnight ago and took their samples away to their laboratory.

“We cleaned part of the bog up initially and straightened up the section before we began to cut away at it.

“We put our samples into small metal boxes which are roughly a metre in size all together.

“Typically a centimetre of peat would be 20 years old,” continued Gill.

“What we are looking to find is the pollen which will tell us a bit about what has been going on in the bog and the surrounding area.”

Gill’s research is being carried out alongside undergraduate student, Adam Purvis

Gill further added that it was 6,000 years ago when the first farmers arrived to the area to cut down trees.

She said it is therefore likely that they will obtain information that shows the trees disappearing which lasted for a few 100 years and then the area getting re-forested again.

“We hope we will get a sequence that would come up relatively recent to see how Ireland changed from a forest landscape to an open landscape.”

Gill and Adam’s study will be the second piece of research conducted on Lackan Bog and she hopes to compare their findings to the study which was completed in the 1970s.

Their findings will be part of an exhibition held in Chandler’s House on Sunday, 23 February 2020 as part of the NI Science Festival.

Gill intends to illustrate her findings from this study in the form of simple diagrams.

Part of the exhibition will also involve going back to 19th century maps of the area and examining the bog before it was cut away.