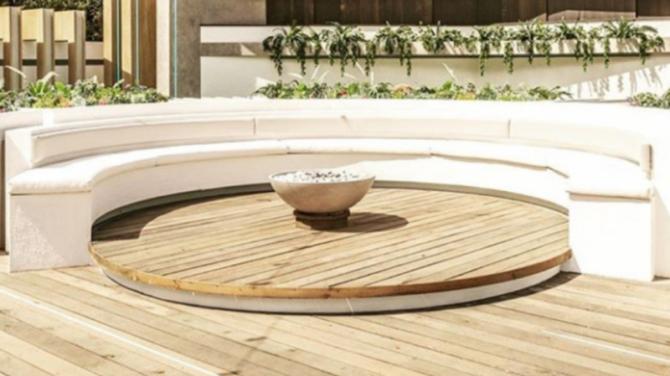 The stunning fire pit in its Love Island location of South Africa, designed and created by Mayobridge company Hard by Design

MAYOBRIDGE will be well and truly on the map following the first ever winter series of Love Island which hit our screens this month.

The new winter ‘bae-cation’ of sizzling South Africa will set the backdrop, along with a new fresh face to present the show in the form of Ireland’s Laura Whitmore and her Scottish partner, Iain Sterling narrating.

And of course, no Love Island series would be complete without the pivotal fire pit as that is where all the magic happens!

Thanks to one Mayobridge company, things are set to get even more hot and sweaty for the new influx of “coupled up” wannabes.

Hard By Design company headed up by Mayobridge man, Paul Morgan and his father Jarleth have created the fire pit which the romantic hopefuls will surround in their times of love, times of woe and of course times of the dreaded “re-coupling”.

Paul said he is not accustomed to the significance of the fire pit, in fact he hasn’t watched a single episode of the show ever.

The father of three said that through his wife Mandy, owner of Beauty Beautique in Rathfriland he became aware of just how famous the fire pit on the show is.

Mayobridge designer, Paul Morgan pictured with his wife Mandy and daughters Lexie (9) and Grace (1). Paul and his father Jarleth’s company, Hard By Design created the fire pit which is being used in the 2020 winter season of Love Island

“One of Mandy’s employees, who is a big fan of the show explained the importance of the fire pit in the programme.

“I didn’t realise it was so important” Paul added.

Speaking to The Outlook about his creation, Paul said he did intend to sit down and watch the show, however.

Hard By Design, Purveyors of Fine Concrete was set up in 2014 is an award-winning design and build company which manufacture products from a mixture of concrete.

Paul said: “The fire pits have become very popular over the last year or two.

“Outdoor living is now just as important to people as indoor living.”

Hard By Designs design and make fire pits for several large contractors across the UK and Europe.

“We are finding that our customer base want their outdoor space to be as liveable as their indoor space,” Paul added.

In the latter part of last year, Hard by Design were contacted and were asked to design and make the gas fire pit for this season of Love Island.

In November, the piece was transported out of Northern Ireland and over to South Africa.

Paul continued: “We have always had to remain so strict with client confidentiality of course.

“We have supplied pieces to famous celebrities and musicians in the past but could never talk publicly about it.

“So it is nice that we are able to openly talk about this particular fire pit.

“For a small company in Mayobridge it is great to finally get some recognition and of course put Mayobridge on the map.

“The official images from the show were released last week, so I have to admit it was brilliant to see our fire pit in the pictures.

“Myself and Mandy are looking forward to sitting down on Sunday night and watching the show, just to see the fire pit of course,” said Paul.