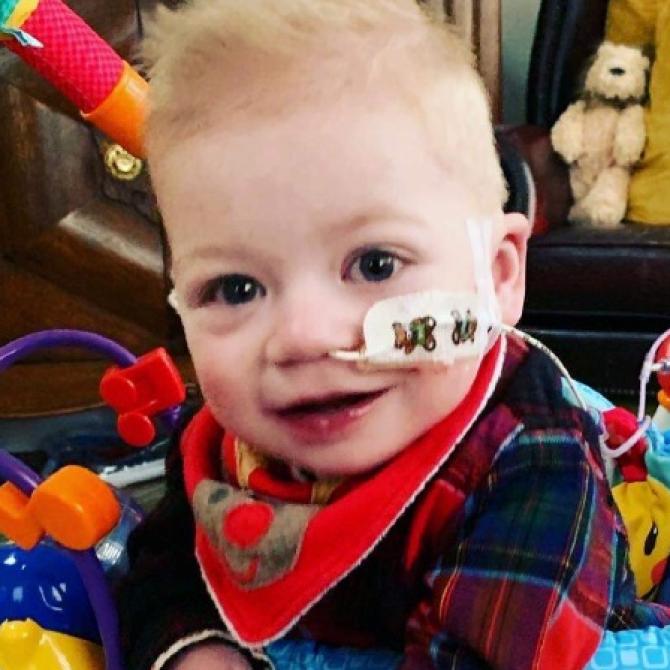 JERSEYS have been designed by the family of Kilcoo baby, Ollie Grant to raise funds and create awareness of organ donation.

Ollie, who is now 15 months old, was born with hypoplastic left heart syndrome and is active on the routine heart transplant list.

The only son of Damien and Riona Grant, Ollie was moved off the urgent organ transplant list last year and transferred to the routine one as his condition improved so much.

The Grants spent months last year between Birmingham Children’s Hospital and the Royal Victoria Hospital with their two-year-old daughter, Aria as Ollie battled to stay alive on several occasions.

However, the little boy defied the odds and has now been living at home with his family for the last seven months and is potentially a candidate for future heart surgery that he was previously deemed unsuitable for.

Ollie is now due another scan at the Royal on 5 February and will then fly to Newcastle on 23 February for a transplant review.

Riona told The Outlook her happy and bubbly toddler is now “thriving” and loving every minute of being home in Kilcoo.

She said: “We spent the majority of last year in hospital and so to be home for seven months is amazing!

“We are understandably nervous about going to Newcastle and what the doctors are going to say, but we are trying to remain positive rather than not because he has been doing so well.

“Since Ollie has been out of hospital we have also moved into our new home and we even were all able to go to Croke Park to see Kilcoo in the final and these are things that we just couldn’t have done before.

“Ollie is just loving being a little toddler and we are busy a lot of the time with nurses coming out and Osteopath and speech and language therapist appointments.”

Riona says although Ollie does have delayed development, the progress he has made in the last seven months has been “phenomenal”.

“He has been affected by the stroke that he took which affects his right hand side and he is almost sitting on his own now and is now taking small spoon feeds too.

“His sight was also affected by the stroke and although he can see straight on, if he is to look to his right he would have to turn his whole head.

“This vision has improved so much that the doctors don’t want to see him for six months. He also absolutely loves both noisy and sensory play and has also been accepted to the Northern Ireland Children’s Hospice for respite care and he has had two admissions which he has loved.

“We stay with him when he is there but he is in the nursery unit and we stay in the family one. It means we also have some one-on-one time with Aria which is lovely too,” she said.

Riona is hopeful that her family will now go to the hospice for a three-night stay every three months.

The local mum has also been busy helping her sister-in-law, Lauren Andre who came up with the idea of designing sports jerseys to create awareness for Ollie and the importance of organ donation.

Riona said: “Lauren had just returned home from Australia and had come up with the idea there but hadn’t said to me.

“When she did I thought it was a great idea and we started designing them. Lauren had emailed O’Neills and had been in contact with them and we were throwing ideas back and forward to each other.

“Ollie loves bright colours which is why we decided to go with the lime green and grey and white.

“The Children’s Heartbeat Trust has been a massive support to us and we wanted to raise funds and also highlight organ donation and we thought this was the best way to do it.”

Riona contacted the charity to see if they would be okay with them using their logo and added Ollie’s heart warrior logo that was created by another heart family that the Grants have become friendly with.

Orders are already being taken and the books are open until Friday, 7 February with the order being placed with O’Neills on Monday, 10 February.

Riona added: “The toddler tops are with the design team but will be ready soon and the kids tops start at £30 since the quality of O’Neills tops are the best out there.

“All profits made will go towards the Children’s Heartbeat Trust and there will also be a #doitforOllie under his logo on the jersey.”

To order the tops, follow the link https://www.paypal.me/doitforollie for payment and in the notes section you can add your order and sizes.

You can also get in contact with Lauren or Riona through Facebook or Instagram and there will be a collection point for the tops to be handed out in around six to eight weeks when they are ready.