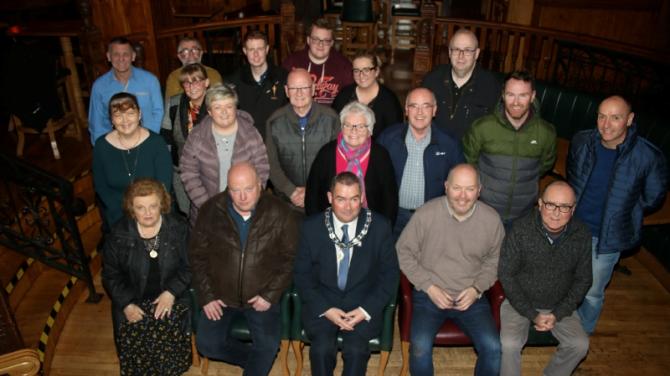 Attendees at the public meeting in the Marine Tavern, Warrenpoint to discuss the future of the Maiden of the Mournes festival

A PUBLIC meeting was held last week to bring together new ideas on taking the Maiden of the Mournes International Festival into the ‘roaring twenties’ and beyond.

Since its inception, the family-led festival held in Warrenpoint every August has centred around the maidens, but this year the committee is keen to rejuvenate the festival with a fresh name and fresh headline event.

It is the committee’s plan that the maidens will be a thing of the past with a new headline event will take centre stage.

They are also keen to get new committee members with “bright ideas” on to the board to “liven the festival up”.

This was the primary focus for public discussion last Wednesday (22 January) in the Marine Tavern, Warrenpoint.

Committee members were joined by members of the public and local councillors to have a discussion on how best to revamp the much-loved family festival.

Joint chairperson Simon Grant explained that parts of the festival have “got tired” and there is a definite need to “rejuvenate it”.

The festival has been running for the last 30 years and the committee opened the floor to new suggestions as well as areas which could be improved upon.

Simon added that “in a nutshell, the last 30 years have been the maidens and to bring the festival into 2020 we have decided to do away with the maidens and now we need ideas to fill that void”.

Last year the intake for maidens across the local area was poor and the committee came to the realisation that young women no longer want to be judged or feel comfortable in taking part in a festival with that as the headline event.

Queries over what Newry, Mourne and Down District Council financially contribute to the festival were also put forward.

A committee member explained that finance is always an issue with the festival and that council puts forward £2,500 in financial assistance.

This however, was met with frustration by some members of the public as it was discussed that £156,000 was spent on the ‘Wake the Giant Festival’ last year.

Chairperson, Simon Grant added that there should be a more “joined-up approach” to the two festivals and that collaboration may be the best way forward in terms of finance.

This was met with a similar view that if there had have been community consultation with council about how to improve the festival over the years the conversation on Wednesday evening on how to revamp the festival would not be taking place.

Simon explained: “At our meetings over the years we talk about how it would be ideal if council, as well as other organisations would sit down and tell us what they think would work and where should we go with it.

“The children’s events in particular at the festival are very well attended and there are other parts that we know are not as well attended,” he said.

Independent Councillor Mark Gibbons said that since becoming a “first-time father in the last number of years” he thought the festival was excellent for young families.

“We need changes to bring the festival forward,” he added.

He said he felt that council was “washing their hands of the festival”.

The question was also raised on whether it would work better if the festival was condensed into less days with one lady voicing her own personal opinion that the “week is too long”.

Elmer commented that it is “very hard” to restrict it to less than a week and Simon said they had previously tried before to reduce the number of days “but it didn’t work”.

It was agreed that the tradition of having the festival running from Sunday to Sunday works best, as there is only the manpower of up to eight to 10 committee members to organise the events across the seven days.

Ideas were put forward on bringing a popular band in to perform one night but the issue of lack of finance was again brought up.

“There’s a clear misconception amongst the public that there is a lot of funding going into this festival, and unfortunately that is not the way it is” a committee member stated.

Councillor Declan McAteer said it was great to see such a good turnout at the meeting and that it was clear that something was not right.

He said there were many successful festivals taking place across the country including Kinsale and that looking at how they are organised could help with ideas for this particular festival.

Meanwhile Councillor Mickey Ruane promised attendees that he would make sure council would sit down and work with the committee on how best to bring the festival forward.

One member of the public spoke out that it wouldn’t take much more to get the festival to where it needs to be.

“There are still enough successful events within the festival without the maidens and we should build on the successful things we have in place already,” they stated.

One of the most interesting ideas of the evening came from stalwart committee member, Brendan Bradley.

Brendan and his wife Myrtle have been committee members since day one.

Brendan spoke passionately about his ideas on how to revamp the festival saying that a headline maritime theme could possibly work well.

Nurturing the local Warrenpoint area and “resurrecting” the Warrenpoint Regatta from the 1930s and ‘40s was brought to the table by Brendan.

“We could attract clubs from the coastal areas of the country and the UK to join us for a triathlon,” he said.

“Our local clubs could host the teams and this would bring in revenue as well.

“Our festival could regain what was lost with the maidens,” he concluded.

Speaking after the meeting, secretary James Mason said it was vitally important that council gets on board with the festival and becomes “pro-active”.

The committee is keen to hear from members of the public who would like to get involved with this year’s festival.

The next meeting is taking place this Thursday (30 January) in the Marine Tavern, Warrenpoint at 7.30pm. New faces are very welcome.

If anyone would like to contact the committee with new ideas please email the Secretary, James Mason on: secretary@maidenofthemournes.com