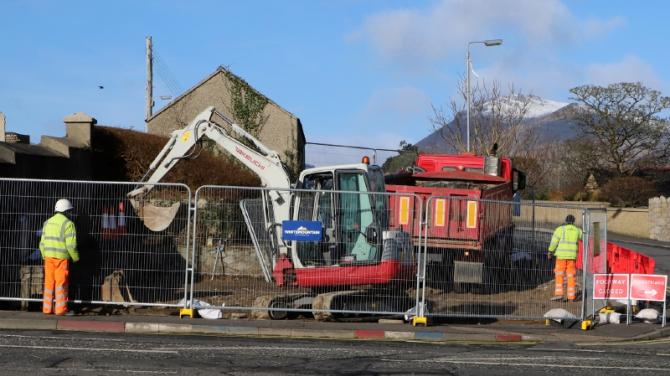 UPGRADING village works have commenced in the village of Annalong and are due to be completed by July 2020.

Some £462,321.75 was secured from the Mourne Gullion Lecale Rural Development Programme for the public realm works.

The upgraded works will focus on the main core of the village for a four-month contract period.

The biggest improvements will be in the centre of the village beside Annalong Presbyterian Church on the Kilkeel Road.

Stone paving will be laid with three seating benches and in the centre is a possible location for artwork or a sculpture by a local artist.

The area will be accessible by granite steps to match the paving on the upper area.

A new tree pit for the Christmas tree will also be placed here and granite paving will replace the footpath at this junction.

Mournes Independent Unionist Councillor, Henry Reilly said he was “delighted” that the works have commenced in the village.

“Myself and former SDLP Councillor Brian Quinn pushed the funding for this project through council and I am glad to see that the much-anticipated works have started.

“I am also hopeful that local contractors will get some work out of it too,” Councillor Reilly added.

“I would have liked to have seen the main street and the harbour area included in this scheme however, but it is great to get investment into Annalong.

“It will involve improvements to the main Glassdrumman Road to include road surface, footpaths, undergrounding of cables, future proofing and a seated area on Major’s Hill.

“The contract period for works has commenced and is due to be completed in July 2020.”