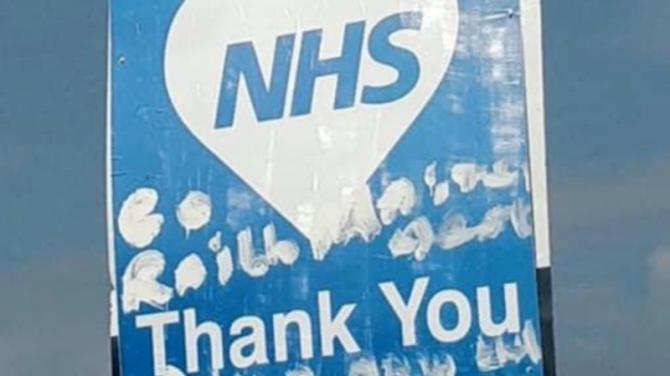 AN ATTACK on a Rathfriland sign supporting the NHS has been described as “completely disrespectful”.

The blue poster thanking frontline NHS workers is based on the Newry Road, and is temporarily covering a Newry, Mourne and Down District Council bilingual boundary sign.

This same council sign has been vandalised on a number of separate occasions and is consequently replaced each time by council staff.

Last Friday (17 April) the local sign in support of NHS workers was found covered in white paint with the words ‘Go raibh maith agat’, meaning ‘thank you’ in Irish.

Paint was also used to write ‘9-in-a-row’ on the sign which is a common reference to Celtic Football Club, and a green and black sticker was also posted on the sign in support of Saoradh.

Saoradh, which in Irish means ‘liberation’ is an unregistered far-left political party formed by dissident Irish republicans in 2016.

The party, which is active in both Northern Ireland and the Republic of Ireland, has reported close connections to the Real IRA.

Saoradh’s emblem, which was also posted on the local NHS sign, combines the sunburst flag with the socialist red star, a pike, and the three national colours of Ireland.

UUP Alderman Glenn Barr said he was contacted by a number of people who expressed their anger at the vandalism.

He said: “A number of local people contacted me about this incident and the fact these references were made on the sign, shows it was done out of sectarianism.”

“People were so disappointed by what had happened because the whole country is coming out together on a Thursday evening to clap for NHS frontline staff and then this happens,” he said.

“Covid-19 does not recognise religion or political persuasion; we are all in this health crisis together and I would encourage people to continue to support the NHS and frontline workers.”

Alderman Barr said the sign has since been cleaned up (above) due to a local community effort.

He continued: “Both sides of the community contacted me about this to express their disappointment with what had happened and that someone would deliberately go out of their way to do this.

“If whoever did this had just written ‘thank you’ in Irish and left it at that then it wouldn’t be too bad.

“However, the fact there was a republican sticker stuck on the sign and ‘9-in-a-row’ it just makes it all the more intimidating and also sectarian.”

Meanwhile, Sinn Fein Crotlieve Councillor, Gerry O’Hare said he acknowledged and supports the “amazing efforts” of frontline staff in the battle against Covid-19.

He said while although the poster displays support for health workers, the bilingual council sign is the only one targeted in the area and had been vandalised twice before.

Councillor O’Hare continued: “Those responsible seem more interested in displaying their intolerance of the Irish language at a time when we all need to be pulling together and focusing on the effort to save lives and protect the public.

“My wife who is a frontline worker in nursing and an Irish language enthusiast is disappointed that support for workers in the NHS is being used as a tool to discriminate against Irish language speakers who work there.”

Meanwhile, a PSNI spokesperson confirmed to The Outlook that no reports were received by police in relation to this matter.